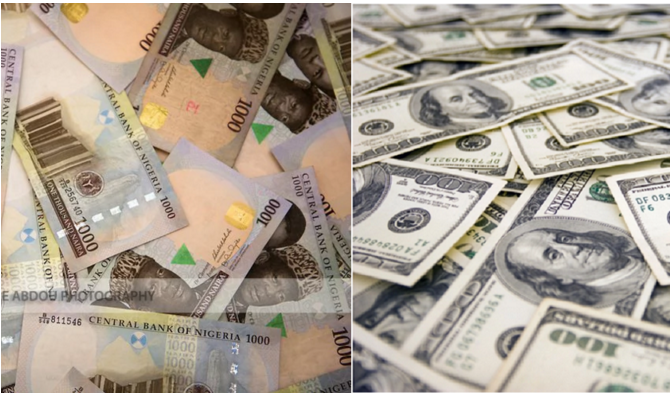 The Bureau De Change (BDC) sources, however, informed that it is impossible to state the exact amount the naira will sell for on the parallel market, but one thing that is certain is that the Nigerian currency has appreciated tremendously against the dollar in the last 48 hours. Read our initial report below: There is confusion in town over the exchange rate of the dollar to the Nigerian currency as the BDC operators are saying that it is now N305/dollar.

According to the information Naij.com gathered from a reliable source in the foreign exchange market that the Nigerian currency, up from its steady rise within 48 hours, has strengthened against the dollar in the wake of President Muhammadu Buhari’s insistence that he does not support the devaluation of the currency.

Speculators had been shocked by the consecutive rise on February 23, as they had predicted an all-time rise from the initial N400 (an all time low) to about 450/500 in the coming days.

There are further speculations that the amount, up from an initial N364 from Tuesday, February 23, is now at N305, while there are also unconfirmed reports that it may slip further before the end of the day. Meanwhile, the International Monetary Fund (IMF) has persuaded President Buhari to adopt a sound petroleum industry bill (PIB) as well as expunge restrictions around foreign exchange policy. While the PIB had been in the works since 2007, it has been dogged by political controversies as well as opposition to the fiscal terms by international oil companies.

The present administration has adopted a fixed forex policy that also does not include the allowance of 41 imported items, and this has been criticised from different quarters.

According to The Cable, a statement detailing IMF observations about the Nigerian economy after its visit in January, its senior resident representative to Nigeria, Gene Leon, said: “Growth is projected to improve slightly to 3.2% in 2016, but could rebound to 4.9% in 2017. “In the light of the significant macroeconomic adjustment that is needed to address the permanent terms-of-trade shock, it will be important for Nigeria to put in place an integrated package of policies centred around: fiscal discipline; reducing external imbalances; further improving efficiency of the banking sector; and fostering strong implementation of structural reforms that will enhance.

“The general government deficit is projected to widen somewhat before improving in 2017, while the external current account deficit is likely to remain flat at 2.3% of GDP.

Growth in credit to the private sector is projected to recover from the slump in 2015, aiding the increase in activity. “Key risks to the outlook include lower-than-budgeted oil prices, shortfalls in non-oil revenues, a further deterioration in finances of state and local governments, and a resurgence in security concerns.”

Woman strips naked in front of police officers – You won’t believe what happened next! (+Photos)

Wow! See the wristwatch Davido bought for his loyalist (+Photos)