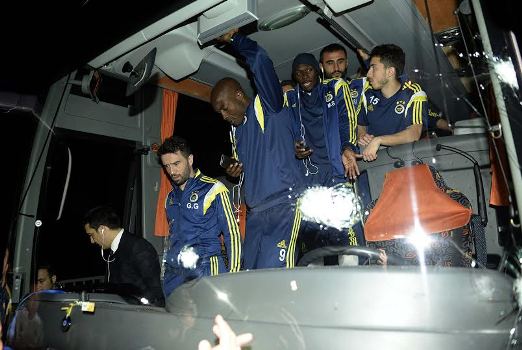 The 28-year-old former Super Eagles star joined West Ham on loan from Fenerbahce last month and has since made two substitute appearances for The Hammers in the English Premier League but admits he almost died in Turkey during his playing days there.

Emmanuel Emenike came out with graphic details of an incident in which he almost lost his life during his days at Fenerbahçe of Turkey, when the club’s bus came under attack from opposing fans.

The former Fenerbahce of Turkey  attacker, who is on loan at West Ham after failing out of favour with Al Ain  of United Arab Emirates last year, confessed that the shooting incident with fans of Trabzonspor was one of the scary moments he had during his time in the Turkish Super Lig.He also said he also regrets the match fixing scandal in Turkey that made him go behind bars for a couple of days in Turkey in 2011.
Emenike claims the spell behind bars gave him ‘a different perspective on life’, and he simply ‘thanked God for letting justice prevail’. While at Spartak Moscow in Russia he was always subjected to racist abuse from fans,then in April Last year ,his team bus was shot at by criminals causing severe head injury to the driver but he escaped unhurt.
“I was on the phone to my brother when I heard a loud bang. The bus suddenly swerved and there was panic.
“I instinctively took cover and our security officer told us the driver had been shot. Seeing him covered in blood was scary.
“We were lucky but it brought back bad memories. I had been involved in a terrible car accident in Nigeria where my mother and I both lucky to be alive.”
‘(Before that), my time in prison was a crazy nightmare that I couldn’t wake up from. I’ve never committed a crime in my life, but I was treated like a criminal, living on bread and water,’ Emenike told the Sun.
“When I was finally cleared I thanked God for letting justice prevail.”
Though he has made two appearances at WestHam ,he says he isn’t under any pressure to justify West Ham’s outlay while signing him on loan.
‘In a team like West Ham, you need instant success to justify lots of things and I am working hard to make that happens to make everyone happy.
‘I am not under pressure at West Ham to get goals. I am focused on the task, which is to score goals and help my team win games, and the goals will come.
‘Every criticism has a positive dimension for me because I always strive hard to be myself, work harder to contribute to the team’s success and get the goals. I am just focused on getting better and getting the goals,’ he told AfricanFootball.com.
-lib

My purpose in life isn’t to be or copy my dad, I’m not in competition with him – Femi Kuti