Sunday Oliseh in another dispute with NFF over sack of personal assistant, Tijani Babangida 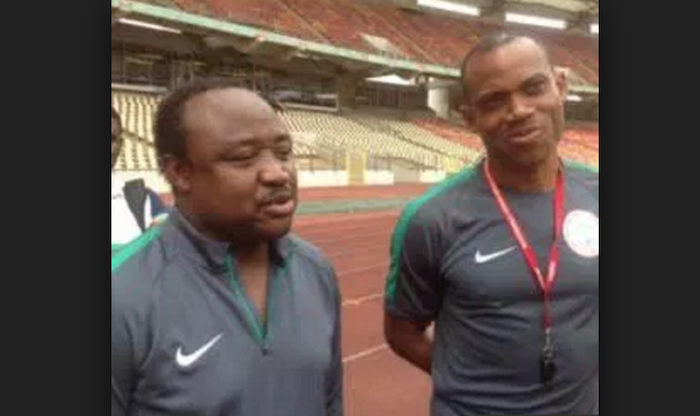 Super Eagles Coach Sunday Oliseh has gotten himself embroiled in another dispute with the Nigerian Football Federation (NFF) after the NFF relieved his personal assistant Tijani Babangida of his duties yesterday. After the NFF’s executive meeting on Tuesday ,the body warned Sunday Oliseh to keep his cool after his recent ‘insane’ YouTube video rant, telling him they won’t tolerate such behavior in the future.

The NFF also told Oliseh that from henceforth all his his invites to the Super Eagles will be defended in front of the NFF Technical committee and also sacked Sunday Oliseh’s personal  assistant whose contract is tied to that of Oliseh.

“The immediate disengagement of Mr. Tijjani Babangida as Personal Assistant to Super Eagles’ Coach,Sunday Oliseh, as recommended by the technical and development committee, was unanimously approved and general secretary was therefore mandated to follow the due process in effecting his disengagement.,” read the NFF communiqué in part.
And now according to a report from Africanfootball.com, Sunday Oliseh approached the football body and fiercely rejected Babangida’s dismissal, claiming Babangida’s contract is tied to his ,and Babangida can only be sacked if he, Sunday Oliseh is sacked.
According to Oliseh ,in his contract with the NFF, he is entitled to bring two members of staff with him, a trainer and his personal assistant.
In Babangida’s contract with the NFF, he is due N600,000 a month, but hasn’t been paid since then.
-lib