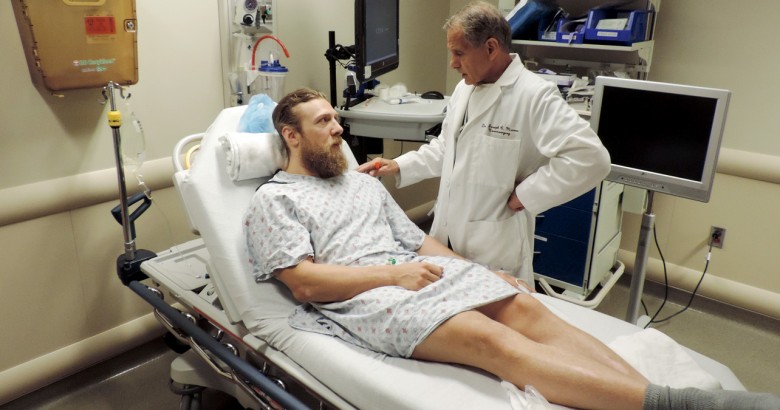 Most devastating wrestling injuries – When it comes to sports-related injuries, wrestling is probably one of the sports that comes to mind. Although the moves are scripted, fake and choreographed, there is still a high probability of things going wrong. There’s no denying that wrestlers hold back when performing strikes, grapples and slams, but everyone else can agree that it is still a contact sport that when done unprofessionally, will result in dire consequences.

Wrestlers from the WWE, TNA and many other organizations go through a lot during matches to entertain the millions of viewers watching at home. Fans are well-aware of the possible dangers in the sport as they’ve probably seen a wrestler get injured on live television.

Who could forget Joey Mercury’s devastating accident that occurred during 2006’s Armageddon? What about Psycho Sid’s “leg-shaking” injury back in his stint at WCW? Or Harcore Holly’s potentially fatal injury at the hands of Brock Lesnar?

Fans don’t even need to search online to remember what these injuries are. For those who didn’t know though; Mercury’s nose and orbital bone got shattered by a ladder during a Fatal 4-Way match. Sid snapped his leg on live television! And Lesnar accidentally broke Holly’s neck after a botched powerbomb.

Those injuries happen every now and then, with some nastier than the other. 2015 is no exemption to wrestling injuries. Those who missed out on last year’s broken bones and all thing’s bent and out-of-place in wrestling should look no further as bellow is the top 10 most devastating wrestling injuries of 2015.

Back in July, the People’s Champ John Cena faced off against Seth Rollins in Oklahoma City. At some point in the match, Rollins unleashed a devastating flying knee to Cena. The move was, as with any other wrestling move, choreographed, but the effect of that particular flying knee was all too real.

At that point, Cena was selling the move very well. When the dust cleared, it was apparent that Cena’s pain was real and his nose was broken and disfigured. Being the professional that he is, Cena went on with the match as if nose was all nice and tidy. He then proceeded to win the match via STF. Now that’s a candidate for employee of the year.