23 Insane pictures of The Undertaker from each WrestleMania.. 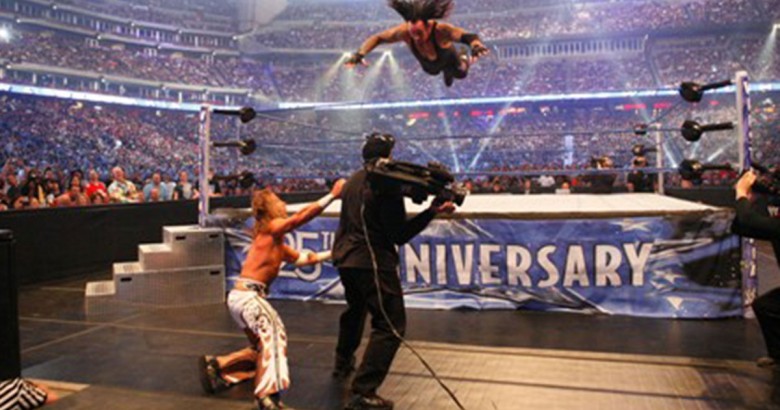 With the good also comes the bad as there have been some terrible matches, but mainly due to the talent that was placed in the ring, and not due to the skill of the Undertaker.

Before the amazing 25 year run the Undertaker has had at WrestleMania, he had made a name for himself in the southern territories with World Class Championship Wrestling (WCCW) and United States Wrestling Association (USWA), wrestling under such names as Texas Red, The Master Of Pain, and The Punisher before getting some mainstream notoriety in World Championship Wrestling (WCW) in 1989 and 1990.

The streak of 21 straight WrestleMania wins by the Undertaker will probably go down as the greatest feat in professional wrestling history.  While being a 16-time world heavyweight champion like Ric Flair is great, that also means he lost the title 15 times prior.  The Undertaker showed up at the biggest professional wrestling stage of the year and defeated opponents for 21 straight matches (not years as he missed a couple of WrestleManias due to injury).

This article contains a picture from every WrestleMania that the Undertaker participated in fromWrestleMania 7 to last year’s WrestleMania 31, along with a preview of his upcoming WrestleManiamatch with a returning Shane McMahon.  Which of these WrestleManias was your favorite?  Continue on to relive some great moments.

23. The Beginning Of The Streak – Jimmy Snuka –WrestleMania 7

The first appearance of the Undertaker was at WrestleMania 7, which was known for Sgt. Slaughterbecoming a turncoat and Iraqi sympathizer in fighting Hulk Hogan for the WWF Championship.  Undertaker had debuted just a few months before at the Survivor Series as a surprise member of Ted DiBiase’s team.

Fast forward to WrestleMania 7 where Undertaker took on Jimmy Snuka.  There really wasn’t much of a build up for a feud leading up to this match.  It was basically a situation where they threw a known veteran who was nearly 50 years old to be destroyed by the fresh new face of the Undertaker.  ‘Taker won the match in just over four minutes.

Prev post1 of 15Next
Use your ← → (arrow) keys to browse
Tags: countdownentertainmentMastermind 101photosThe UndertakerWrestlemaniawweWWE Superstars
Share12Tweet8Pin3SendShare