My end has come – Shekau surrenders? 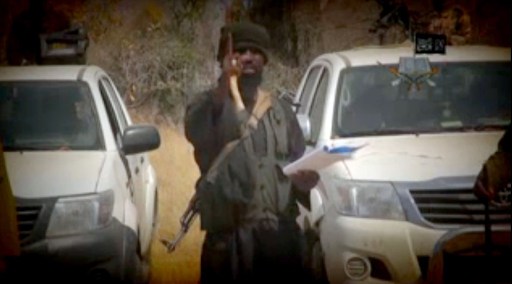 Shekau surrenders: Nigeria’s most wanted terrorist, Boko Haram leader Abubakar Shekau appeared on video for the first time in more than a year on Thursday, rejecting rumours about his death but appearing to signal his time in charge of the Nigerian jihadist group may be coming to an end.

In a message that contained none of the defiant bluster, taunts and denunciation of political leaders of previous videos and will likely be interpreted as an admission of defeat, the dejected-looking Shekau declared in the Hausa language: “For me the end has come”.

“This is a message of greeting and joy for you to see my face,” said Shekau, who in March 2015 had pledged allegiance to the Islamic State group in an audio message.

“This is my desire: that whoever sees this will hear nothing but greetings between me and you. Only Allah knows the rest, as you believed (and) as you submitted. For me the end has come.

“This is only the message I want to send to you for you to understand that this is certainly I. This is why I did this.

A military source in the Borno state capital, Maiduguri, in northeast Nigeria, told AFP: “Watching Shekau in this video, the message is clear: the game is over.

“For this arrogant and boastful terrorist to speak in such a meek and subdued tone shows he has been trounced beyond his imagination.

“It is a farewell video.”

Unlike messages from the Islamists at the end of 2014 and start of 2015, which were slickly edited and closely resembled those of the Islamic State group, the new video was poorly shot.

It was also posted on YouTube rather than via Twitter accounts linked to IS supporters and websites used by fellow jihadists, which had become Boko Haram’s preferred medium of communication.

The bearded Shekau, who looked thin, spoke to his followers in front of a lime green background, with the Boko Haram black flag superimposed in crude graphics.

He also makes no mention of the Islamic State or Islamic State in West Africa province (ISWAP) and uses the group’s original name “Jama’atu Ahlis Sunna Lidda’awati wal-Jihad” or “People committed to the propagation of the Prophet’s teachings and jihad”.

There was no indication of when or where the video was shot and Nigeria’s military said it was trying to determine its authenticity.

“We are subjecting it to thorough forensic investigation,” they said in a statement.

Some analysts cast doubt on the authenticity of the video, pointing out that Shekau’s face is dark and questioning why the old Boko Haram insignia is being used instead of that of the Islamic State.

“If the message is legitimate it does raise some interesting questions,” Africa security specialist Ryan Cummings said.

“It could signal perhaps a change in leadership or even focus for Boko Haram.”

In the video, Shekau referred in the past tense to the Borno state town of Gwoza, which Boko Haram overran in mid-2014 and declared a caliphate, referring to it as “Darussalam” or “Home of Peace”.

The town was later retaken in a military counter-offensive that has seen Boko Haram-controlled towns, villages and territory seized back over the last year.

Boko Haram supply lines are said to have been squeezed, preventing them sourcing fuel for hit-and-run attacks and conventional fighting, although suicide bombings persist.

There have also been reports of fighters surrendering for lack of food. Shekau himself is said to be in hiding in the Sambisa Forest area of Borno state, currently targeted by the military.

Nigeria has claimed several times that Shekau has been killed since the start of the deadly insurgency responsible for at least 17,000 deaths since 2009, only for him to reappear in video messages.

The military believes several lookalikes have since stood in for him.