Read what Ocholi was up to before his death + Atiku, Yahaya Bello, El-Rufai reacts to his death 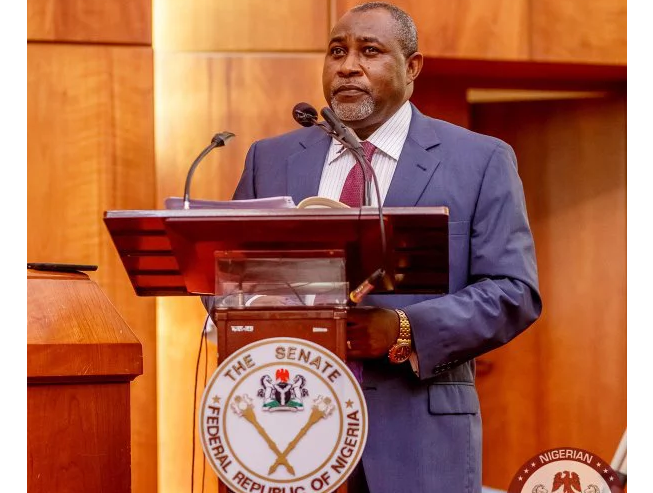 What Ocholi was up to before his death – Reactions have continued to trail the death of Nigeria’s minister of state for Labour and Productivity, James Ocholi. The late minister who died in a fatal car accident alongside his wife and son on Sunday, March 6, has been described as an erudite lawyer, gentleman and seasoned politician by former vice president Atiku Abubakar, This Day reports.

A statement by his media office read:

He was a wise and brilliant man, who was expected to impact significantly on the Buhari administration and the lives of Nigerians in many positive ways.”

According to Atiku, the nation had lost a committed professional whose place in his profession, political party and the budding administration in place today, would be hard to fill.

The statement urged those who knew the deceased and his colleagues in FEC and the generality of Nigerians to take heart and bear the irreparable lose.

Atiku also prayed for the repose of his soul and for the quick recovery of his driver and other aides who survived the accident.

Reacting in the same vein, the APC said that it received the news of the death of Ocholi, his wife and son with great shock and sadness.

According to him, the late Ocholi who was the party’s former deputy national legal adviser will be remembered for his selfless service to the country as minister, party, legal profession and his home state, Kogi.

Buni also prayed for the recovery of other occupants of the ghastly accident including the late minister’s driver who reportedly sustained serious injuries.

“With heavy heart and tearful eyes, I join fellow countrymen, particularly the good people of Kogi state in mourning the untimely demise of Barr. James Ocholi, SAN. You were, right up till your death, a consumate gentleman, a sound legal luminary and a quintessential family man. Your demise, along with your immediate family members is a grim reminder to us all that life on Earth is but a temporary abode. May your soul(s) rest in perfect peace, Amen. Adieu we fare thee well.”

“pragmatic, dynamic, humane and brilliant law officer known around the world for his dexterous approach to legal and political issues an as one of the most unswerving constitutional lawyers Nigeria has ever produced”.

According to him, Ocholi was a complete gentleman and was irrevocably committed to the advancement of Nigeria.

Bello added that Ocholi, who hailed from Ogbabede-Abocho in Dekina local government area of Kogi state, joined other progressive minded individuals around the country to drive the intellectual pillars of the APC.

Also, the Kaduna state government expressed deep shock over the incident. A statement by Samuel Aruwan, the spokesman to Governor El-Rufai read:

“The state government extends its heartfelt condolences to President Muhammadu Buhari and the Ocholi family.

“Our condolences go to members of the Federal Executive Council and the entire nation, the minister died at a critical time when his contributions in the on-going national rebirth and realisation of the change mantra were needed.

“May the almighty God grant their souls eternal rest,” the statement said.

“It is simply unbelievable that my good friend James Ocholi is dead. Worse is that he died with his beloved wife and child. This is most tragic. This is most shocking.”

Before his untimely death, late minister was on the verge of brokering peace between the Joint Health Sector Union (JOHESU) and the federal government.

Following a disagreement between the Joint Health Sector Union (JOHESU) and the federal government, a meeting held between both parties last Wednesday, March 2, was the last official engagement by the Kogi-born legal luminary.

According to him, Ocholi was already close to resolving the crisis between the union and government.

Ocholi was also said to have held a meeting last week with officials of the Nigerian Union of Local Government Employees (NULGE) to address complaints by the union.

Meanwhile, President Muhammadu Buhari has expressed shock over the demise of one of his ministers, James Ocholi.

The senior special assistant to the president on media and publicity, Shehu Garba, while speaking on behalf of the president, noted that the late Ocholi was a key component of President Buhari’s change agenda.

“Barrister Ocholi was an accomplished and patriotic Nigerian, who was keen to accept the call to service at a time his country needed him.”

In 2011, Ocholi was governorship aspirant in Kogi state on the platform of the defunct Congress for Progressive Change. Between 2013 and 2014, he was the deputy national legal adviser of the APC.

Last year, he sought the APC gubernatorial ticket at the party’s primary election, losing to the late Abubakar Audu. He was appointed minister in 2015.

Dele Momodu reacts to Davido calling him out in Osinachi remix