The long list of hot women Hugh Hefner has slept with – #2 will shock you! (With Pictures) 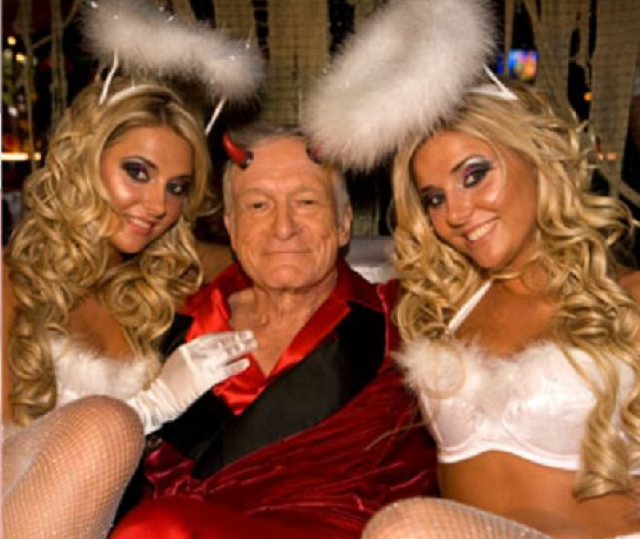 List of hot women Hugh Hefner has slept with – Is there a person alive unfamiliar with the Playboy brand? Whether it’s the iconic bunny head, the girls or the magazine itself, Playboy has stayed iconic throughout the years. The publication recently made headlines by halting nude photography, but they vow to keep the content scintillating in other ways.

But what is more iconic about Playboy than the man, the myth, the legend himself: Hugh Hefner. The now 89-year-old is effectively worth almost $50 million and is entirely self-made. Other than his obvious business prowess, the owner of Playboy Enterprises is known for being just that: a playboy. Between multiple marriages and girlfriends throughout time, as well as living in the women-filled Playboy mansion, Hefner is something of a ladies man. In fact, he’s pretty much the ladies’ man to end all ladies’ men – but who can blame him? All of his partners, no matter how serious, are all at the very least seriously gorgeous. These 15 are what could be considered the cream of his crop.

If you go through Playboy covers during the early to mid-80s, Carrie Leigh will show up quite a bit. She was known infamously as a cover model for the magazine, but also as a known lover of Hefner, though he never considered her a girlfriend, nor did they ever get married. Instead, Leigh was used as eye candy more than anything, with Hef referring to her as his “Baby Boo-Boo.”

The role of girlfriend was never officially given to Leigh, but she saw their relationship as something substantial regardless of their official title, which led to being part of a “palimony” suit after the “breakup.” She now runs a magazine of her own – Nude.

Top Post Today: 10 Things we learnt from the P-Square’s latest drama (With Pictures)