10 Women who look like Justin Bieber – #2 will surprise you! (With Pictures) 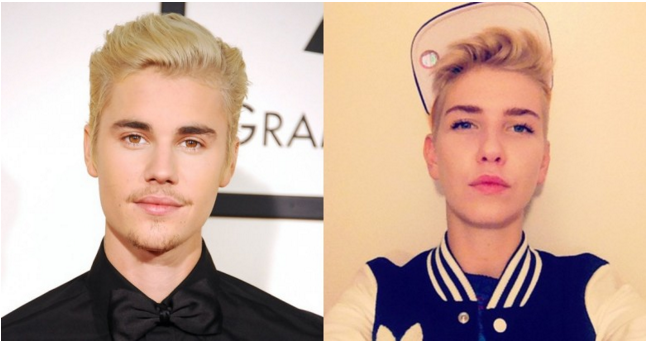 Women Who Look Like Justin Bieber – As much as we make fun of Justin Bieber, no one can argue that he’s popular.  He’s one of the most listened to pop artists of the modern age.  His concerts draw more than tittering teenage girls; they draw women and men of all ages.  His following calls themselves “Belie-bers,” a ridiculous sounding, but fitting name.

Justin Bieber has made a reputation for himself as a narcissistic, joking, sweet heartthrob.  Is it any surprise that, like any celebrity, he has people trying to imitate his appearance?  You can find teenage boys all over the world working to copy his swept hair and over-confident allure.  Even better, you can find women copying his look- and they pull it off better than he does.

There are a lot who prefer Bieber’s style (we know, it’s actually hard to argue that Bieber is “mannish,” but you get the idea).  In fact, there are actually whole Instagram and Tumblr accounts dedicated to this singular topic.  Check it out: here are ten people who look just like Justin Bieber! When she was getting ready to go to the department store that day, do you think she planned her outfit? Do you think she intentionally chose skinny jeans with an over-sized baseball cap with the hopes of looking like a relative of that cutout of Justin Bieber? Or do you think that she rolled out of bed and threw on her normal garb and stumbled upon this cutout and realized that she looked just like him? In either case, she definitely nailed the chin grab. And Justin’s nails would look a lot hotter if he borrowed her neon blue polish.

LADIES: 5 Things you need to consider before getting rid of a broke boyfriend – See this now!