Charly Boy had 7 kids from away matches? Find out more in interview with his wife, Diane Oputa 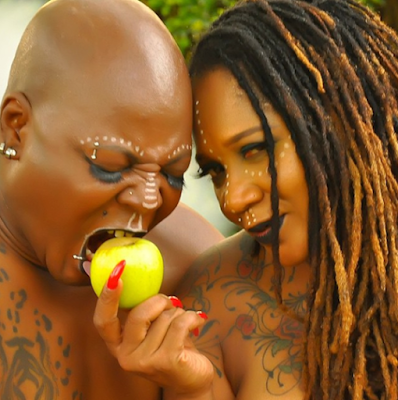 Social media titan Babalola Osogbiye dug out the dead bones in an interview with wife of the latest Marriage counselor “Charly Boy”. An enlightening interview that reveals the ups and the downs of the marriage life of the couple and how they have been able to pull through 38 years without being a subject of media. Words are not enough to give details of the interview, read more below…

Nigerians congratulate Charly Boy for proposing to his wife…

She is married to one of Nigerians most controversial iconic personalities. The “weird” one Charly Boy has fought for the rights of the average Nigerian. He has on several occasions been tortured by the Nigerian police and the military for standing up to bad leadership or unfair treatment of the impoverished masses. His television series, The Charly Boy Show was one of the most watched programmes for a very long time. He’s an accomplished singer/songwriter, television presenter, publisher, producer and talent judge.

The American trained mass communication masters degree holder, who decided in his own words, to punish his parents by creating the larger than life image. A punk, a boy, an AreaFada, and lately a Jesus lover. He has been married three times before, his present marriage is the 4th and maybe the last, kissed Denrele Edun, has a pet python was photographed naked. That pretty much sums it up, from a shallow point of view. One person who knows this enigma would be his wife of 38yrs the best person to give intimate account. Lady Diane Oputa.

38yrs SEEMS LIKE FOREVER IN COMPARISON TO THE LIFE SPAN OF THE AVERAGE CELEBRITY MARRIAGE. HOW HAVE YOU MANAGED ?

I have been able to manage very well because of the man I got married to. Charles is a strong family man, a decent gentleman who puts his family first before anything else. He has been a wonderful husband, a good father and a wonderful son to his parents. Charles is the husband every woman dreams about. He is sensitive, he listens, the first to apologize if he is wrong. I love his never say die spirit. I think we were ordained by God to marry each other because we both want the same thing, we are both committed to our marriage. Like they say, it takes two to tango. However our marriage has not been a bed of roses, we have our issues and challenges, but because we are best of friends, because we are loyal to our commitment we always resolve whatever issue that comes up, to move forward. We don’t have a perfect marriage, no such thing in this world, but we have a friendship that has endured through time.  It has been a long journey and we have had ups and downs within the 38years that we have been together. But we are happy together. A lot of couples haven’t got that far-we are really privileged. I thank God.

WHAT HAS BEEN THE HARD PART OF YOUR UNION? , THE THINGS THAT MADE YOU MAD.

In the beginning it was the women, my gosh! Women everywhere. Charles is a charmer. He had 7kids from his away matches and the women he married that didn’t work out, before we got married. His stubbornness was sometimes obnoxious. During his hay days as a performer, his acts were sometimes so overboard that I will refuse doing his background vocals and we always argued/quarreled about that. But as the years rolled by I found ways of calming him down, and curing my high blood pressure. I later found out that the women were more for his hypes and pons, like the charly’s virgins. One thing I knew from the beginning was that my husband always wanted to be a family man, after all he grew up seeing both parents together for sixty something years before papa passed on. Much later the women thing totally fizzled out. In the beginning I wasn’t too sure how to deal with all his children from deferent women, but trust charles he knows how to put his family together. That’s how I overnight became a mother of 9 children plus my last three. The only thing that he still does that pisses me off till tomorrow is his silence, when he is angry about something. He will lock himself in his room and may not talk to me for days. I can’t deal with that because we talk all the time our communication is on point. He always says he doesn’t want to say the wrong things when he is angry. Otherwise, Charles is the best thing to happen to me and I thank God for that.

WHY DO YOU THINK CELEBRITIES MARRIAGES HAVE SHORT LIFE SPAN?

Celebs marriages are not different from any other marriage, however, the bottom-line is that both parties have to know what they want from the start. For most young people it’s about the packaging and never the content. Marriage is about two people who want to stay married no matter the weather, if one person wants it more than the other it won’t work. The ingredients for a fairly decent marriage, will be mutual respect, good communication between the couples and good friendship. Thank God that today what we have most, is old fashion friendship. My husband is not your typical Nigerian person, above all he listens and he is very sensitive to how I am feeling as my friend and it’s all mutual.

HAS YOUR TRUST FOR HIM EVER WOBBLED?

Yes, in the beginning the first maybe 8yrs, too many drama that I was dealing with. It wasn’t easy at all but I also matured along the way. I began to see things for what they really are not for what it looked like. Experience has thought me how to separate the boy Charly from my man Charles. Charly is an incorrigible botton pusher and that will never stop, but my man Charles is also an incorrigible introvert and that’s who I married. A few times he has reported himself to me and he is not good at lying. BEING FULFILLED IN MARRIAGE IS GUARANTEED WHEN YOUR SPOUSE IS SUPPORTIVE, UNDERSTANDING AND SENSITIVE TO YOUR FEELINGS AND MOST IMPORTANTLY, WHEN HE IS ALWAYS LOOKING FOR CREATIVE WAYS TO KEEP THE FIRE BURNING.

YOUR HUSBAND IS NOW A MARRIAGE COUNSELOR OF SORT, HOW DOES HE COPE GIVING UP HIS PERSONAL NUMBER TO FANS WHO HAVE MARRIAGE PROBLEMS?

Yea, that’s Charlyboy for you, who else would give their personal number on air. Do you know how many calls he receives per minute? He however has been doing all of that for a very long time, it’s only recently he went ballistic with that. I guess for him, he wants to always feel useful, always wanting to teach, to share, to give hope to the hopeless, that’s charlyboys story, aside the fact that he likes to confuse people with his antics. Am I surprised? no. I won’t be surprised if tomorrow he opens a church. Charles has always been spiritual ever since I met him, very deep. That’s why for people who meet him one on one, they are so charmed because he is nothing like charlyboy puts out. And it takes intelligence and discipline to know the boundaries. He has counselled and inspired millions of nigerian youths, to be themselves, be focused and never to let anyone kill their dream. I love him for the many lives he has touched and still touching, for all who worked with him, they too can testify he added value to their lives. That’s who he is.

IT’S ALMOST GOING TO 4DECADES OF MARRIAGE WHAT KEEPS THE FIRE BURNING?

Hummm!!!! Charly can be un unrepentant romantic when he wants to be. Though he hasn’t pulled any stunt to sweep me off my feet recently, but he can be full of surprises. The last time, he asked me to escort him to the airport to receive a certain business partner from the carribean. Before I knew what was happening, I was on my way to the Bahamas, sweden and Dubai, with nothing but my purse. He knows I love romance and from time to time he figures ways to sweep me off my feet. That’s why we try to keep it as youthful and as fresh as we can. We really work at it. It’s not easy but we are determined. Charles woos me with his outlandish and elaborate stunts, and I like it. I always look forward to my birthdays. We are like two buddies.

Charles has always been spiritual, has always given himself to service. He has always been an inspiration to millions of frustrated nigerian youths. His life style has made thousands chase their own dreams and never gave up on theirselves. Yes, people where not too sure what to make of him, because he kept confusing people who couldn’t see the humour or the sense in how he was putting out. He has always been about how he can add value to his environment and the people he meets. He may not have been a regular church goer but was a Christian by his actions. I guess the difference now is that the press seems to be reporting more of his works and the value he promotes than all the stunts he pulls to keep the people guessing. But yes he is more calmer now, more at peace now and more spiritual. Like they say, there is a time and season for everything. He is been there done that and seen that, what else can be new for him so I guess is Jesus time from here on and that’s all the better for him. He is doing what God wants him to do.