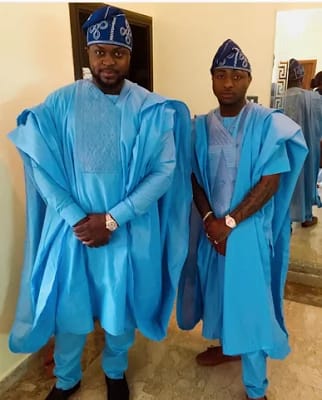 Davido and brother Adewale Adeleke at their sister’s traditional wedding.

This could be recorded to be the first wedding bells in 2016, in the family of popular Nigerian music star David Adeleke also known as Davido.

David’s sister Ashley Coco Adeleke who was previously accused of abducting his brother’s daughter, Imade Adeleke while travelling to Dubai on Thursday, May 12, tied the knot with her sweetheart in Lagos.

The traditional wedding was creatively designed by celebrity event planner, Funke Bucknor CEO Zapphire events. It could be recalled that in 2013, the music star’s elder sister Sharon Adeleke walked down the aisle with her lover Yomi Ademefun in Miami, United States of America (USA)

Davido took to his Instagram handle to post a picture of him and his father and namesake, Elder Adedeji Adeleke both rocking the ‘agbada style’. Davido was seen wearing a blue ‘agbada’ with royal blue ‘Aso Oke’ cap while his father was dresses in a grey agbada with the caption: