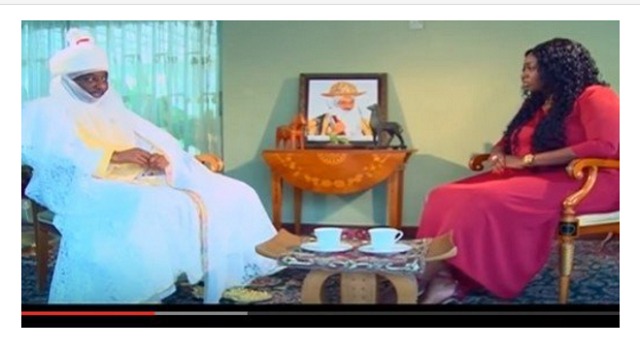 Emir Sanusi reveals how GEJ threatened him – This is an explosive something!! Emir Sanusi Lamido Sanusi recalled what happened between and the then President Goodluck Jonathan after he exposed Diezani and the looted Billions at NNPC:

“The president called me and said I should see him at 3pm. I turned up at 3pm and the entire place had been swept.

There was no one apart from security services. Eerie silence. I got to his office, it was just me and him. It was as if everybody had been asked to go.

And so he says to me, he’s calling me because he is surprised that letter I wrote to him got to Obasanjo.

I said I’m surprised too. He said he’s calling me because he thinks I know who gave Obasanjo the letter and I said no I don’t. He said the letter must have been leaked from the Central Bank and I said no, the letter was in different places.

It was in the villa, it was in petroleum, it was in finance, it was in CBN. Either way, Obasanjo has been president so he lived in this villa for 8 years and he is more likely to have sources in this villa than inside the Central bank.

But I said I was not resigning. I said I had no intention of resigning. He [Jonathan] got very angry once I mentioned the minister [Allison Diezani] and said whether you like it or not, you’re going to leave that office, I cannot continue to work with you, either you or I will leave government.”

Sanusi said he knew that for daring Diezani who was the most powerful minister in Jonathan’s government he would be in big trouble but he was ready to die for Nigeria than keep quiet.

“I knew that taking on NNPC was taking on the most powerful minister in Jonathan’s government, and nobody who had touched Diezani had survived.

It was not a question of what would happen, I just didn’t care at that time. I did not want to go down in history as having seen this and kept quiet”.

Watch full interview of Emir Sanusi with Forbes TV below: