We’re not supernatural being, your insults gets to us sometimes – Dayo Amusa begs 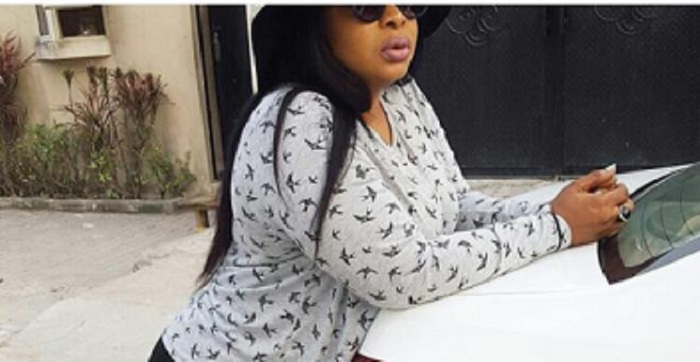 Pretty Yoruba actress, Dayo Amusa, has been in the news lately after she tried to stand up for the Kosoko families but she was not spared by controversial social critique, Kemi Omololu, who gave a brief insight of the actress way of life.

Maligned by the various accusations leveled against her, the actress has chosen to remain silent while watching the turnout of things as her name keeps trending on the lips of many.

The actress looking cool on the sunny afternoon, decided to air her mind on the way people perceive celebrities thinking that they are one super natural being without bloods in their vein.

Dayo, who is pained by the way people criticise others and their works pointed out that they as humans have been trying their best but people should think twice before throwing shades at them.

In her sober reflection, she wrote; “CELEBRITIES are not supernatural being. It’s so PATHETIC of anyone to think otherwise WORDS!!! Those five letters can make or break anyone. The words you hear can either lift you up or bring you down. The words you say to someone can either uplift them or destroy them. I see & read a lot of postings on social media & some of these words cuts deep. Forget about the usually high school bullies. High tech bullies (cyber bullying) are deadly!!!! The way these people furiously attack other people’s picture,career,family,even worse,children is terrible. It’s even more disheartening when I see grownups doing this.

“How does one criticized their fellow human being in such manner? Hiding behind the keyboard to make other people miserable will never add values to your life. I have noticed this predominantly among Nigerians/Africans. The way they tear down makeup artist & their work is mind blowing.

“Don’t get me started on Nigerian artist both actors & musicians.There is something called constructive criticism or unbiased opinion. I must commend Nigerian artists,they are actually doing their best with what they’ve got. In a country as frustrating as Nigeria, no light, no water, pricy fuel & bad road,they still managed to produce decent movies. Nigeria’s movie industry has actually improved a great deal,most especially the Yoruba movie industry.

“We have great actors and producers producing & acting in great movies.It’s sad to see that these folks still get attacked on social media.People felt it’s their calling to meddle in these people’s personal life. These folks are not made of stones.They have feelings just like u & I. I don’t think I can sit back & let anyone attack me or my family like that.Only a coward sits behind a screen & a keyboard & bully other people.We need to do better, let your words encourage,lift & build others. Remember we’ll all give an account of every idle words.Let’s build each other up. Uplift other people’s business. If you have to say something think about your words. if you are in the other person’s shoes, how will you feel if those words are spoken to you? Life is difficult enough for us to be tearing each other down. Think before you type. Thank you.”