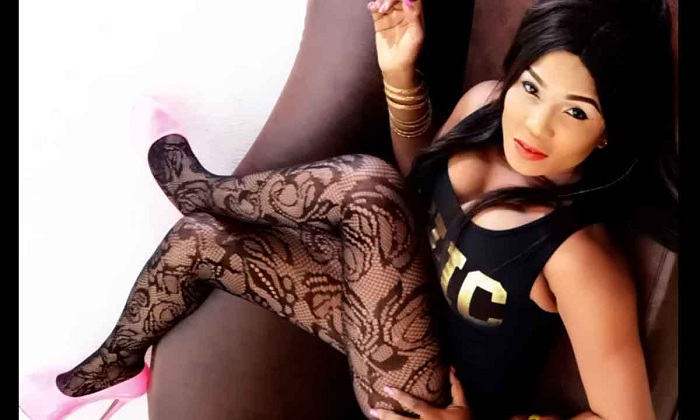 Unable to bear a recent heartbreak, up and coming actress, Ruth Eze who has become a popular face in the Nollywood industry allegedly attempted suicide after she was jilted by her lover based in Abuja.  According to what sources told theinfong.com, Ruth Eze who was recently credited to have said in an interview that actress, Genevieve Nnaji, makes her wet, went visiting her man in Abuja only to discover that he has been having affair with her close friend and colleague in the entertainment industry.

“Ruth couldn’t stand the pain because she had thought that her lover had forgiven her after she was slammed with lesbianism scandal. To make matters worse, they had been making plans to go pay her bride price this coming Christmas and her family members have approved the marriage. The relationship is over 4 years old.

“After she saw her friend in her fiance’s arms, Ruth was stuck in her hotel room for over 24 hours. She was not picking her calls. It was later discovered that she had bought overdose of sleeping pills in attempt to take her life but for the timely intervention of another actress who had accompanied her to Abuja.

That her friend is suspected to have poisoned the mind of Ruth’s husband-to-be to abandon her. She  is husband-snatcher, that is what is reigning in Nollywood now. They snatch and brainwash people’s lovers, even husbands” the source squealed.

She also added that Ruth, has been under close observation since the incidence but she has been wetting her pillows with midnight tears.

Recall that Ruth Eze had earlier debunked the reports that she was into ladies: “I am not a lesbian and I can never be a lesbian. My mother is a devout Christian and she is an evangelist. I can never be a lesbian.  I never said that; all I said in the interview was that I love Genny very much and I still love her till date. I don’t care about what anybody says. I don’t judge anyone whether they are a lesbian or not. It is between you and God because the bible says we should not judge.”

Actress Tonto Dikeh in trouble again, See what she did this time

Top Post Today – LADIES; Before you get married to your boyfriend, make sure you do these 10 things in front of him!