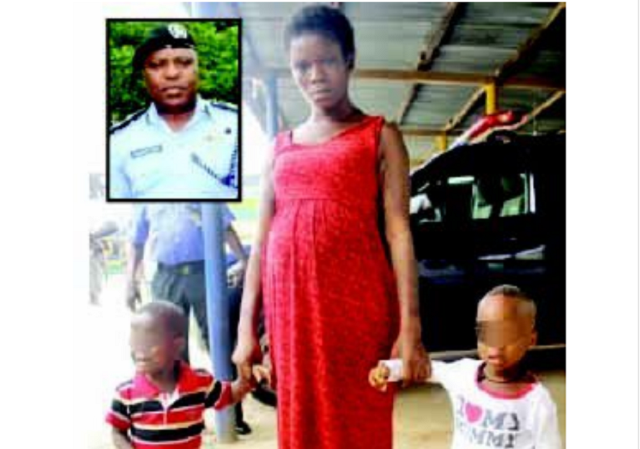 Pregnant woman who kidnaps & sells children for 50k – Two mothers in Anambra State now have good reasons to give thunderous testimonies in their churches following the good work of detectives under the Anambra Police Command, who acted promptly and arrested the woman who stole their two three-year-old sons.

The suspect, 32-year-old Chidinma Favour Okorie, a mother of five, who is pregnant is alleged to have committed the felonious act in Idoma village, Umuoji in Idemili North Local Government Area, Anambra State.

Okorie is a native of Amasiri, Afikpo, Ebonyi State, where she lived with her husband until she fell into the cold embrace of the police in Anambra State, where she was caught in the act following an alarmed raised by the mother of another she attempted to steal.

The cheery news was disclosed to Sunday Sun by the newly appointed Commissioner of Police, Mr. Sam Okaula, who also said the suspect was part of a syndicate and had allegedly stolen several babies in Anambra State until nemesis caught up with her during her last fateful trip.

Explaining Okorie’s modus operandi, Okaula said that she regularly came from Ebonyi State to perpetrate her act and then sell the stolen child for N50,000 to a child-trafficking syndicate that works with hospitals in Onitsha.

However, when her cup of iniquity filled up and spilled, Okorie was arrested on August 2 at Idoma village in Umuoji community, Idemili North LGA, Anambra State by police detectives as she was perfecting plans to escape from the town with a three-year-old boy earlier stolen from a compound in the village.

Okorie’s cookie crumbled when the mother of a boy she stole, Nneka Victor, raised the alarm and reported the theft to policemen at Osidi Police Station, who promptly dispatched a team to arrest the suspect, who had two boys with her, both aged three years.

Recounting how she perpetrated the act, Okorie said: “Usually I come from Ebonyi State to Anambra State to steal children and sell each one for N50,000 to a syndicate at a hospital (name withheld) in Onitsha.

On this particular ocsasion, I went to Idoma village in Umuoji community. I met a woman who was with her little child, and pretended that I was looking for somebody.

The mother of the boy told her son to take me to the place and from there I took him away. I did the same thing in another street, where I wanted to take another three-year old before the mother of the victim alerted the community and the police and the two stolen boys were rescued.”

Confirming Okorie’s account, one of the jubilant mothers said: “The suspect came to my compound and asked for somebody. As I knew the person she was asking about, I told my three-year son, Victor, to take her to the place.

When he did not immediately return I rushed out to look for him. I didn’t know that she did the same to another woman and took her three-year-old son.

It was when she wanted to escape with the two boys that we alerted the community and policeman at Osidi Police Station.”

During interrogation by the police, she mentioned the name of a certain doctor who runs a hospital in Asaba, Delta State, who she claimed administered a deadly oath on her never to disclose the truth when arrested.

“I am married and have five children. We live at Amasiri, Afikpo Ebonyi State. I am a trader but it was greed that made me go into child trafficking.

I started on July 15, 2016, when I sold the son of a pastor (name withheld) to the staff of a hospital that is part of the syndicate.

The doctor that owns the hospital paid me N50,000. Immediately I got my money I went back to Ebonyi State, she said.

The police also arrested the doctor who she claimed bought the stolen boy from her, but he denied the allegation saying: “I didn’t know the woman. I didn’t know that she was dealing with one of my staff with regard to child trafficking.

I only saw her once when she came for blood sample. I didn’t have any deal with her. I was surprised to see policemen who came and arrested me over child trafficking.”

The State Police Public Relations Officer, Supol Nkeiruka Nwode advised parents to be more vigilant and monitor their children, adding that they should avoid sending them on errands that are not very necessary.

“The suspect could have escaped with the two little boys if their mothers had not alerted the community and the police. She commended policemen at Osidi Police Station for their prompt action, which she said, was a clear demonstration of the new spirit being brought to policing in Anambra State by the Inspector General of Police and the new police commissioner. She assured that the suspects would be arraigned in court soon.