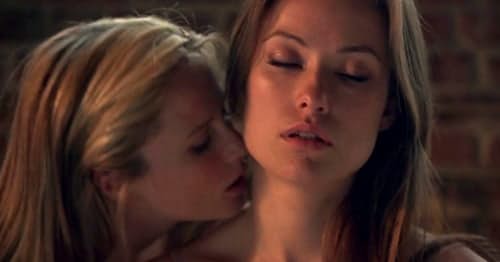 Actresses who played gay characters very convincingly – One of our favourite sub genre of movies are lesbian ones, and we’re not afraid to admit it. Films and television shows featuring a hot lesbian character gets us hot under the collar in more ways than one! We love the idea of a girl who is willing to put it all out there, get up and close and personal with another chick, but go home and want to be with a man. Maybe that makes us selfish, but let us hold onto this fantasy!

The truth is, in a television and film world continually dominated by the same remakes, filmmakers and stories, narratives about LGBT characters has offered new ways around old stories. For so much of pop cultural history these stories were too taboo to be seen in any kind of mainstream film or television show, so it’s only in the past couple of decades that the experiences and stories have been a storytelling option. In many countries, homosexuality is still illegal and still has dire consequences. Representation matters.

While in an ideal world, part of this representation would involve having more LGBT actors having equal opportunities to their heterosexual counterparts. We don’t live in that world, and aside from featuring some of our favourite actresses on this list, most of these movies and television shows are actually pretty good, too.

Glee wore out its welcome well before the first season was up. What began as a potentially groundbreaking show with a sinister streak quickly turned into a bizarre pastiche of musical theatre and after school specials. It’s not a great television show. The cast though, was always great and we always had a special spot in our heart for Naya Rivera, who played Santana Lopez on the show. Santana’s storyline on the show largely dealt with her struggles with her sexuality as she came to terms with being gay, in particular, her struggle in coming out of the closet. While Rivera has hinted in several interviews that she may have a bisexual streak, she has never openly dated another woman. She is now married and has a child with fellow actor Ryan Dorsey.