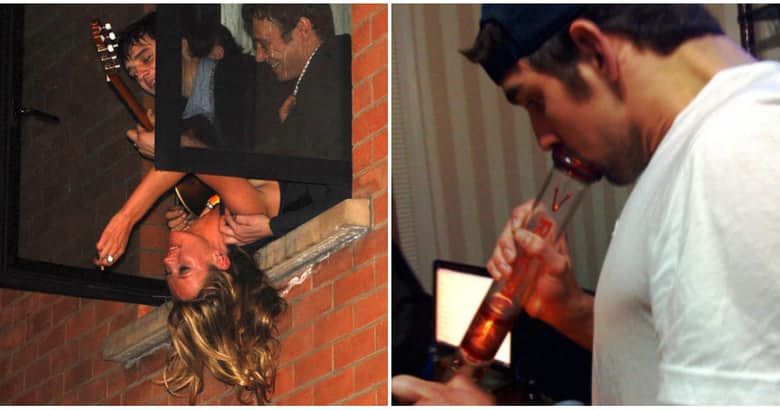 Times celebs were caught using hard drugs – We all enjoy a drink or five, a heavy night out, or maybe some of us even like to indulge in a few illegal substances, but hey, whose to judge, right? Drugs have been around for as long as we have, with our ancestors often treating themselves to a Class A or two or a cheeky glass of the old vino. That’s right, from the Sumerians who liked to overindulge in a little opium, to the suspicious tea drinkers in China.

In fact, substance abuse and pill popping has basically been around forever. With no real change today, especially when you compare the USA’s meth crisis, or the constant need for weed among the young, drugs are just as common as they were all those years ago. But what happens when a celebrity is caught in the act? With those famous faces just as entitled to dabble in the area of narcotics as us regular folk, it can sometimes be an even more dangerous game.

As money seems to be no object among the rich and famous, anything can become available. With no limitations or restrictions, addictions can spiral out of control, along with their careers. And catching just a glimpse of a celebrity gone rogue, you can guarantee the paparazzi will be there, waiting in the wings, ready to catch that career-ending snap. However, not everyone has a problem, with some just in it for the binge, the constant party, or release of a stressful day.

So, let it be seen that even celebrities make mistakes; here are 15 photographs of celebrities busted on drugs.

Poor Whitney Houston, loved all over the world and forever idolized, Houston’s voice will undoubtedly go down in history as one of the best in the world, if not the best. Beginning her career as a model, Houston eventually went on to act, direct, and sing, becoming one of the most influential performers of our time.

As the only artist to chart seven consecutive No. 1 hits, Houston’s first album was actually the best selling debut album ever. Garnering more acclaim for cult classic The Bodyguard in 1992, the soundtrack kicked off Houston’s signature song, with I Will Always Love You, forever being attributed to the star.

However, with a turbulent relationship with ex Bobby Brown, drugs and alcohol became a common theme within Houston’s success. Often pictured ravaged by drugs, Houston finally succumbed to her addiction in 2012, when she was found drowned in a bathtub at the Beverly Hilton Hotel in Los Angeles. With heart disease and cocaine listed as the cause, the news of the death shocked fans and regular folk alike all over the world.

15 Celebrities Instagram is going to take down next (With Pictures)