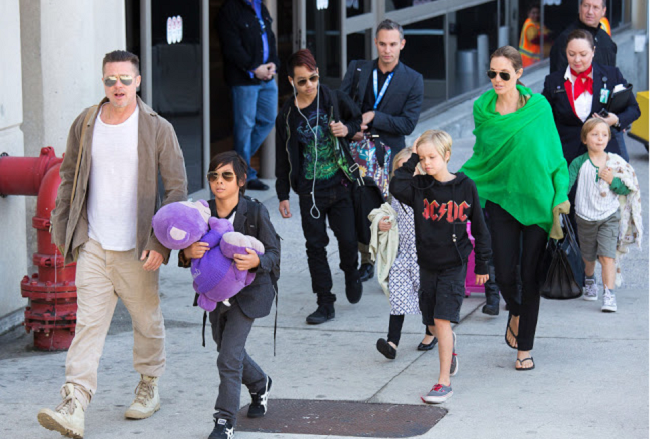 Brad Pitts begs Angelina Jolie to let him see his kids – Brad Pitt has begged wife Angelina Jolie: “Please just let me see my kids.” Angelina, 41, is blocking the actor, 52, from visiting their six children while the FBI continue an investigation into alleged child abuse, The Sun reports. It has now been revealed Brad got into a fight with adopted 15-year-old son Maddox on a private jet last Wednesday.

Insiders have since claimed the teenager, originally from Cambodia, was defending his mum when Brad lunged at him.

Those close to the actor worry about his state of mind as he feels as if he has lost his wife and kids at the same time.
Insiders told the SUN
“There was a tense moment on the plane but nothing that came close to anything constituting child abuse.“Brad is a caring parent but, like many fathers, his relationship with his son can be strained at times. They had started arguing before they were even on the plane and it was tense afterwards.”

Sources close to Brad are also worried about his state of mind. He fears losing his wife at the same time as his kids Maddox, Pax, 12, Zahara, 11, Shiloh, ten, Knox, eight, and Vivienne, eight.

The insider added:
“Brad is in a mess right now. He isn’t able to see the kids and he is desperately trying to make sure they are OK by calling valued members of his and Angelina’s staff.Brad is known as the firmer parent in order to balance Angelina’s more liberal approach
“He isn’t worried about his own reputation right now. His complete and utter devastation has come from what his children are going through.”
Members of Angelina’s team have been accused of exaggerating the claims to smear Brad.Brad is known for being the disciplinarian in the family to balance Angelina’s more liberal parenting methods.

But the pal added:
“Brad can be strict, but that’s what kids need sometimes, especially teenagers. He doesn’t want them to grow up as spoilt brats.“But he spends a lot of time with Maddox, one on one, just hanging out, so none of these claims make practical sense.”

Too much telemundo: Monalisa Chinda caught kissing her hubby in public