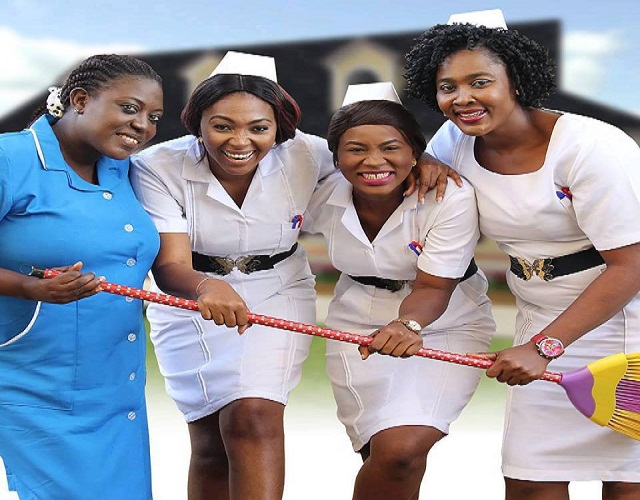 Do you normally watch the soap, Clinic Matters on TV every week? Have you noticed a pretty actress called Nurse Titi in that soap? Lets tell you a bit about this sexy actress who has carved a niche for herself in the movie sector. Although her real name is Nkechi Emmanuel, everyone simply calls her Nurse Titi.

She is one of the new generation actresses rocking Nollywood right now. And give it to this pretty babe, she is good at what she does. Apart from acting in Clinic Matters, Nkechi has acted in many other movies and more often than not she acts the role of a Nurse. Why is that so? She spoke to City People Publisher SEYE KEHINDE a few weeks back. Below are excerpts of the interview.

Can you share with us how you’ve been coping as an actress?
I thank God. I have been doing great. I have been into acting officially since 2008 till date. I have been running the industry alongside with my education. I graduated from LASU in 2014 I studied History and International Relations. Now, I am facing the industry squarely. I don’t have to be squeezing exam time, audition time and shooting time.
Why did you go into the industry? What was the attraction?
Growing up I have always had a flair for entertainment generally. Initially, I started off as a model. I am still a model till now. My dream then was to be a runway model. So when I go for audition they will be like oh you are beautiful, you are good but sorry we can’t take you because you don’t have the heights. So, I will be down cast. Oh God! Why am I not fall. I will go and wear heels and they will say I am still not tall. I just had to more ahead and I started doing Photographic modelling my friend who is very tall gets picked for shows all the time. From there, I went to National Arts Theatre. I met the Secretary and I registered as a member of the Actors Guild of Nigeria member. I paid into the UBA Bank our till date I am a bonafide member of AGN.
And that is how I started off going from one audition to the another till I grabbed 2 roles. My very first role ever was a sublead for a movie titled When you are mine by Uche Ubonabo. I played alongside with aunty Eucharia, Emeka Ike, Ini Edo, Queen Nwokoye, I was like very small and petite then. And they were really happy to have me around and they were teaching me this is how to do this and that.
That role was that of a house nurse when the movie came out that was where the Producer of Clinic Matters saw me and they had the plans for producing Clinic Matters. When he saw me he contacted the producer of the film, Uche Nbonabo. He called me for an audition for Clinic Matters. On getting there, we were over 400 girls. And he told us he needed just 3 ladies, because he had the role of just 3 girls and I am like God how will this happen. I was scared. I was nervous, I was shaking. That was in 2009, He did the auditioning, from 400 to 300 to 50 to 10. At that point he dropped 5 and picked the 3 and I was one of the 3. It was me, Amanda and Franca. Amanda played Nurse Abigail, Franca played nurse Theresa and he announced me as Nurse Titi. He said he saw the Nurse Titi in me. I was happy. I was excited. That very day they called the tailor they took our measurement for the nurse uniform, and we started shooting in 3 weeks time. He gave us the script. The script was hilarious. He was funny. I fell in love with it. This was how we started clinic matters.
I did clinic matters for over 5 years or more. My whole attention was on the job. I gave it my best. That was the thing that got me to where I am today. After that, I started getting other roles in movies and till date I doing other movies. I cannot deny the fact that Clinic Matters was what launched me into the movie world. I cannot deny it.
Which has been the most challenging movie you’ve done to date?
Challenging? I will say its a movie I did in Owerri. We had to shoot in the forest, like 3 nights, non stop. I had to act in a scene where a snake would have to come and bite me. And they brought the Mallam that brought the snake and it was at night, it was challenging. I had to keep begging mi Director. I said please I cannot do this. He said you must do it. This scene is where the character died and it was the snake that is supposed to bite you.
The Hausa man was there assuring me that madam he no go bite you. And they brought a live sname to lie beside me in the thick forest at night. The man said even if the snake bite you it has anti poison to cure it immediately and so it won’t get into my body. I said haaa! That was the most challenging role I have acted in to date. I did it oo. I acted that role. The place was quiet. It laid beside me. I close my eyes I was just praying. It was big. That scene took us a long time to shoot. It was about 2 years ago. The movie is out. It is titled Horror In The Grave.
Any recent movies you have acted in?
A lot. Most Wanted Nurses, I don’t know why I keep getting the nurse roles. Black Bird, Warri Languar, After my Wish, Dead Alive, there are so many. I am enjoying it. The industry now is getting more interesting than before.