Nollywood actor who burst into flames on movie set finally speaks out – His present state is so bad! (See Photos) 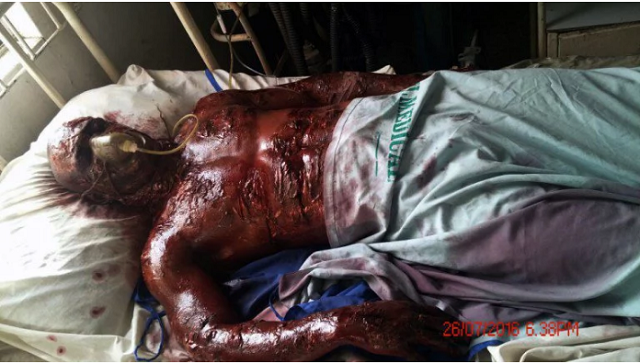 Actor who burst into flames on movie set – Nollywood actor Ani Iyoho speaks on why he chose a to do the fire scene stung – He reveals who who gave him confidence and how he communicated with the director during the stunt. After being reportedly burnt while shooting a scene on movie set Behind The Wheels, fast rising Nollywood actor Ani Iyoho has revealed why he thought it was safe to dry the daring stunt.

In an interview with Pulse, he said he was excited about doing something daring and new in Nollywood. He said he got confidence from the experiences special effects artist.

He said: “Apart from me and the special effect makeup artist, who had already run tests and knew how safe it was, I guess every other person was already kind of skeptical, a little bit on the edge.”

“I had a code I was gonna give them when I thought it was too much. When I thought OK, it’s time for them to put it out from me.”

The movie is called Behind the Wheels and is directed by Stanlee Ohikhaure. It stars Ani Iyoho, Patrick Doyle, Liz Benson, Chiwetalu Agu, Sani Danja, and others.