Fans blast KCee after sharing this photo with D’Banj – Does he really look like a disabled person?? (See Photos) 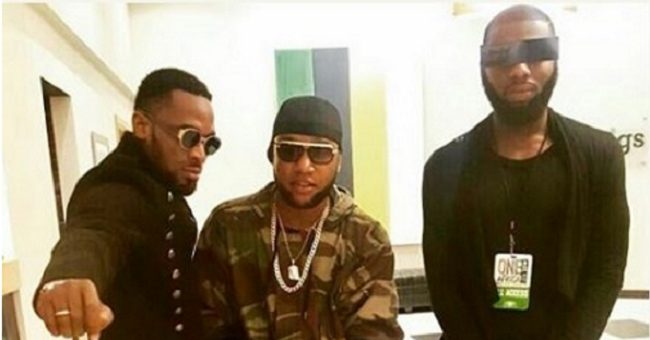 Fans blast KCee after sharing this photo with D’Banj – Fans have spoken out after a new photo of popular singer, Kcee emerged online showing him posing in a rather awkward way. This new photo of Kcee posing with Dbanj and Swanky Jerry has caused an uproar online.

The photo shows Kcee standing inbetween the two men and striking a pose that some fans have found quite amusing.

The singer is seen dressed in a military outfit and taking a slight squat. His legs are bowed and his hands are brought down in front of him with his left hand acting as if it is going to grab his crotch.

Social media users have been quick to point out that the ‘Limpopo’ crooner is standing in a strange way.

Some netizens said his hands are placed as if they are paralyzed and his posture which is a sligtly bent one makes him look like he is disabled.

However, other users have confessed there is nothing wrong with the photo and that Kcee is just trying to be different.

What do you think of his pose?

D’banj and wife Didi Kilgrow filmed dancing in a nightclub