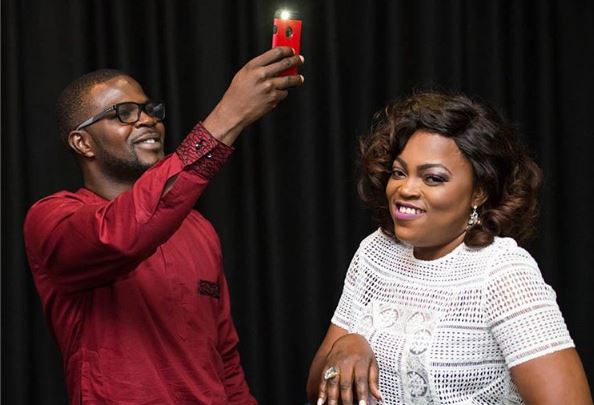 In a recent interview, the newlywed said this while speaking about some of the changes that have occurred in her life since getting married. She said:

“Before I met my husband, I used to work on Sundays, but he always says that I need to rest.

Our chef leaves on Saturday mornings to see his family, so whenever I want to cook, my husband tells me not to do so and we eat out. We do that very often. Now, I enjoy my life and I rest.”

Newly-married actress, Funke Akindele-Bello, talks about her acting career and her marriage experience

As an actress, script writer and film producer, Funke Akindele-Bello can’t be considered a small fry in Nollywood. With a career that has spanned almost two decades, the thespian who cut her acting tooth with the role of Bisi, a curious but intelligent secondary school student in the United Nations Population Fund sponsored sitcom, I Need To Know, in the late nineties, has endeared herself to a legion of fans beyond the frontiers of Nigeria. She is also one of the few actresses who have thrived in the English and Yoruba genres of Nollywood.

Popularly known by her alter ego, Jenifa , a sobriquet she earned after the successful release of her hit film, Jenifa, and its sequel, The Return of Jenifa, Akindele-Bello, is back to filming after taking a recess that lasted several months and during which she wedded musician, JJC Skillz, in London. She provides an insight into what she is up to presently. “I have been filming a new television series called In Da Streetz. It is about the entertainment industry and how people try to survive. It also dwells on the hustle and bustle in the ghetto. It would be full of glitz, glamour and it’s a production that has deep content,’’ she says.

The new project is not in any way similar to Jenifa’s Dairy, and will feature big names in the entertainment industry, she reveals: “My new project is music-oriented, so I am working with people like K-Switch, Mo-Easy, Lydia Forson, Linda Ejiofor, Tina Mba, Kunle Coker, and Freeze of Cool FM. It is just a group of people coming together to do something different on television through Scene One Productions, where I am the CEO. My mission is for people to enjoy wholesome entertainment.”

After her first marriage to Kehinde Oloyede, crashed in 2013, the actress, recently got married a second time albeit secretly in London to entertainment guru, Abdul-Rasheed Bello, aka JJC Skillz, last August. She says the latter who is a producer, music video director and artiste, fashioned the concept for her new project. “My husband is a pioneer in the music industry, so he has been there. He gave me the storyline and the synopsis which I developed and edited,” she states. The award-winning actress recalls that acting is something she’s always wanted to do from a young age. She started dancing and acting in primary school and also belonged to a cultural troupe. She joined a drama group while in secondary school and pursued her passion relentlessly even as an undergraduate.

A lawyer by training, she recollects how her father ensured she studied Law at the University of Lagos. “I recall that my father wanted me to study Law because he wanted me to become a lawyer. Even though he had his reservations about acting, I was undeterred,” she says.

Today, being celebrated and making some money out of acting is a plus for her as she says there is nothing more fulfilling than doing what she loves and getting paid for it. She stated, “I am grateful to God for the opportunities that have come my way as an actress. When I started out, it wasn’t easy and there were lots of challenges. I have been acting and producing films before I came out with Jenifa. The movie was a commercial success and following it up with Jenifa’s Dairy, was a like an extension of the goodwill Jenifa, enjoyed.”

Although critics have argued that she didn’t need to create a series using the Jenifa cognomen, Akindele-Bello quipped that one of the lessons she has learnt in life is that people will say a lot of things and attempt to make you lose focus especially when they realise that you are making progress. “If you have an idea, sleep, eat and drink it until you make a reality of it. Jenifa is a brand that I love so much. I didn’t even want to come up with the series but I realised that a lot of people like the brand. When I go out, I speak to a lot of young people. They like Funke quite alright but when I give them that variant of English, Jenifa is known for, the reaction is priceless,” she adds.

For her, producing Jenifa’s Dairy, has become a tiring effort: “I am tired of producing the series because it is time-consuming but my husband says that I cannot stop now because my fans love it, people are celebrating me, I have won awards and every day, they talk about me because they are not tired. People say it’s the best TV series, so I cannot stop.”

What are the downsides of acting? With a huge sigh, she affirms that there have been times when she felt like throwing in the towel but some inspirational songs keep her going. “The gospel group, Mary Mary, inspires. Whenever I listen to their songs, I am inspired. One of their songs goes thus: ‘I just can’t give up now. I’ve come too far from where I started from, nobody told me that road is going to be easy.’ The song teaches me that good things don’t come easy, you just have to push. There are many times when they write about me in the newspapers and magazines. I just say to myself that it’s not their fault, it’s because I am acting. At such times, I want to quit acting but then, I look into the mirror and say to myself, you have it in you, don’t give up and bury your talents. This is why I use my talent as a tool to pass messages across to people,’’ she says.

Even though Akindele-Bello, refused to comment on her new marriage, she speaks about some of the changes that have occurred in her life since getting married. “Before I met my husband, I used to work on Sundays, but he always says that I need to rest. Our chef leaves on Saturday mornings to see his family, so whenever I want to cook, my husband tells me not to do so and we eat out. We do that very often. Now, I enjoy my life and I rest.’’

Akindele-Bello, who clocked 39 in August, said she wants to be remembered for her brand and the lives she has impacted. In addition, she desires to take a lot of young people off the streets. She says, “I have a not-for-profit organisation and I am going to be working with Lekki Coliseum, very soon to empower young people. I’ve done that a couple of times and we organise workshops and trainings. We give people start-up kits to begin their businesses. I am passionate about the empowerment of young people.

“I also want to set up another NGO to help people living with cancer. I have a friend who was diagnosed with stage-four cancer and she has given me the permission to talk about her journey. Many times when I was broke, I still had give her money to attend chemotherapy sessions. Because of the state of her health, she was unable to move around to seek funding. Thankfully, I am healthy and I can still work, so I am grateful to God for keeping her alive.’’

On her likes and dislikes, the thespian is quick to say that she likes frank and honest people. She abhors liars, those who steal and she cannot stand indiscipline as well.

Hear her: “People call me Margaret Thatcher, because I do not like indiscipline. You must not be rude, we are Nigerians and we have a culture and we are well-trained. I am Yoruba girl, so you have to be respectful. I always tell people that never believe that because you are made, you can bring people down. Even if you are up there, remain level-headed so you don’t fall,’’ she concluded.

Mikel, Iheanacho and Musa to battle for 2016 African Player of the Year award