‘Igbos are no longer proud of their language’ – Pete Edochie reveals 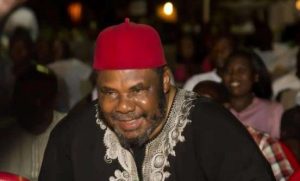 Veteran actor, Pete Edochie has submitted that the Igbo people of Nigeria no longer show a sense of pride about their language. Edochie, who is renowned for playing Okonkwo in the adaptation of Chinua Achebe’s “Things Fall Apart” novel disclosed this in an interview with Ugwumba Television.

The actor thinks the low patronage of the Igbo language by its natives may lead to its extinction.

“Igbos are no longer proudly speaking their language, if you ask somebody a question in Igbo they will reply with English and English don’t even suit their mouth. If we keep running away from our language it will die.”

According to Edochie, he has tried to promote his language whenever he gets the opportunity despite being trained in English like many.

“Now, they gave us Africa Magic Igbo, they came to me and asked me what to call it and asked where to launch it. I told them to come to Enugu the eastern capital.”

“I spoke on the night of the launch for a long time without adding any English word and there are few people in Nigeria that speak English as well as I do because I studied English and was trained by the BBC.”