The long list of female celebs Madonna has slept with – this will shock you! (With Pictures) 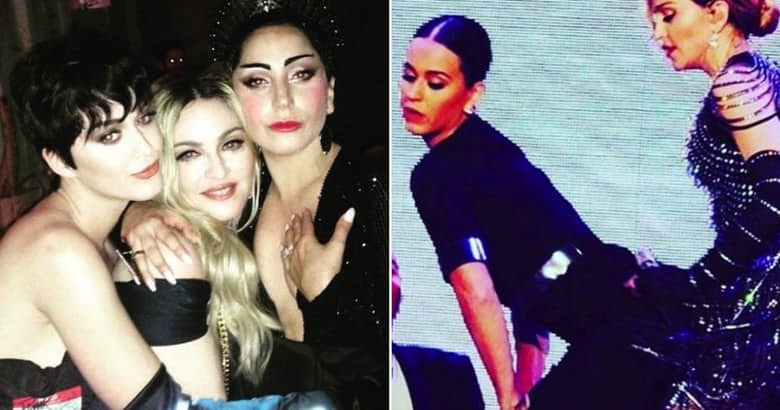 List of female celebs Madonna has slept with – It’s fun to go back in time and reminisce about who-dated-who in Hollywood. Some relationships we’ve forgotten about, and others are so hush-hush that they weren’t even common knowledge to begin with.

The men get most of the credit for their hook-ups. Charlie Sheen probably holds the record for the most partners. Brad Pitt has the most hyped relationships. And George Clooney is known the world over for being a serial monogamist. But what about Hollywood women? Taylor Swift is the woman that jumps to mind right now for having the most hook-ups in the shortest amount of time. But Cameron Diaz and Jennifer Love Hewitt have also been with their fair share of men. However, none of that is too shocking. Men dating women, and women dating men… no big deal.

What’s way more juicy is reviewing the women that female stars have hooked up with. And no one has been with more women that the Material Girl, Madonna. Her love life is legendary, and spans decades. Always one to push the envelope, she continues to challenge stereotypes of love and sex in the most delicious ways. Her little black book is filled with women fitting every description, from the masculine-women with cropped hair to the girlie-girls with lipstick. Whether it is kissing, touching or more, Madonna always pursues her innermost desires. And we, as the public, are fortunate enough to have front row seats to her hedonism.

Everyone knows about her marriages to Sean Penn and Guy Ritchie, her flings with sports stars Dennis Rodman, Jose Canseco and A-Rod, and her romances with Warren Beatty and JFK, Jr. What most people still don’t know about are her girl-on-girl encounters. So lick your lips, because you will cherish this list, find it to be true blue and find that we will justify your love for all things Madonna.

Every diehard Madonna fan knows who Moira McFarland is – she was Madonna’s best friend growing up and was featured in the documentary Truth or Dare reuniting with Madonna. Even in her youth, Madonna was always experimental and breaking boundaries. She smoked, she drank and performed as a go-go dancer in a school recital. She also revealed that she had relations with McFarland in high school.

McFarland has said that she had no recollection of the event; however, she also said that she did a lot of drugs over the years which impaired her memory. Madonna apparently remembered a lot more of the details of her time with her “childhood idol.” She said the two of them shared McFarland’s parents’ bed which was two twin beds pushed together, that they jumped around naked together, and that McFarland taught her how to use a tampon. Although the two were estranged for years, McFarland apparently retained strong feelings for Madonna. She wrote her letters, and asked Madonna to be to godmother of one of her children.