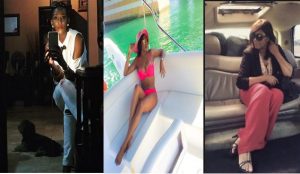 Rukky Sanda is probably the queen of luxury lifestyle right now in Nollywood. She doesn’t give interviews that much so little is known about the actress. Her age is not even known, but she is believed to be in her 30s or approaching.

Born in Ikorodu as Rukayat Akinsanya, Rukky doesn’t travel that much, but when she does luxury shopping is the minimum expectation. Her outfits are always top notch and suits her slender figure although she doesn’t grace the red carpet frequently.