Ooni of Ife with Kwam1 D Ultimate – Still on the Imperial Majesty crusade for peace, Unity and love for the entire Yoruba race and human race spread across the world, the Ooni of Ife has concluded arrangement to visit Countries in Europe between 4th November to 13th November, 2016.

The trip which shall be the best ever has the King of Fuji Music: Alh Wasiu Ayinde Marshall (K1 D ULTIMATE) who shall solely hold the stage for Ooni of Ife in a big concert at Amsterdam on the 11th Nov. 2016. 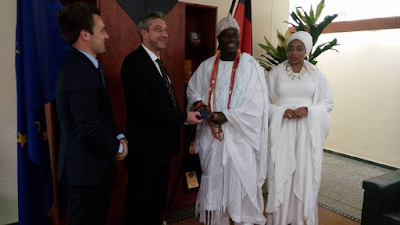 The trip which includes be celebration of African Culture, Yoruba race, diplomatic dinner/Cock tail of Ooni of Ife with Ambassadors of Africa continent in Frankfurt, Meetings with Chambers of Commerce and Industry in Germany, Business Forum with Captain of Industries in Hmaburg, Town Hall meeting in Hamburg, meeting with Investors and signing of MOU in The Hague- Netherlands, Cultural display, Sango live Performance in Europe.

“ltr”>Sir Sina Peters Afro Juju King live performance with Nice in Hamburg ( 6th November, 2016) , Adewale Ayuba as Guest of Honour, 2face Idibia presence as the newly appointed Peace Ambassador by Arole Odua, Governor of Lagos State during Celebration of Eko @50 by OONI OF IFE in Europe, Speaker of Lagos State, Governor of Osun State during celebration of Osun @ 25, Governor Orji Uzor Kalu holding the stage in Europe , Professor Wole Soyinka lectures during the celebration and may more activities shall take place during the tour of His Imperial Majesty. 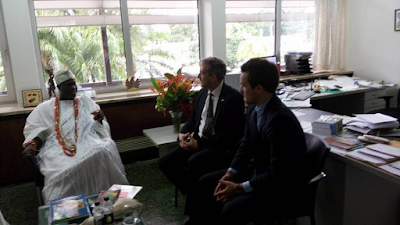 In a phone conversation with Barr Adeyanju Adewale Toyin the president AFRICULRA AWARDS (The organizer of Ooni of Ife Europe Tour) who is currently on a tour to Europe with Bridget, confirmed the high expectation of Oduduwa sons and daughters in Europe to welcome their father.

Princess Toyin Kolade also reaffirmed the statement and assure that the experience of Europe tour shall be more exciting than any foreign trip ever of his Imperial Majestey. 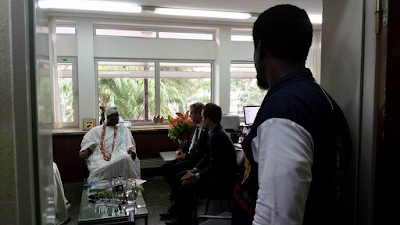 In a bid towards this, His Imperial Majesty visited German Embassy and appreciated them for their diplomatic support given towards the tour.

K Michelle shows off her curves in half nude photos