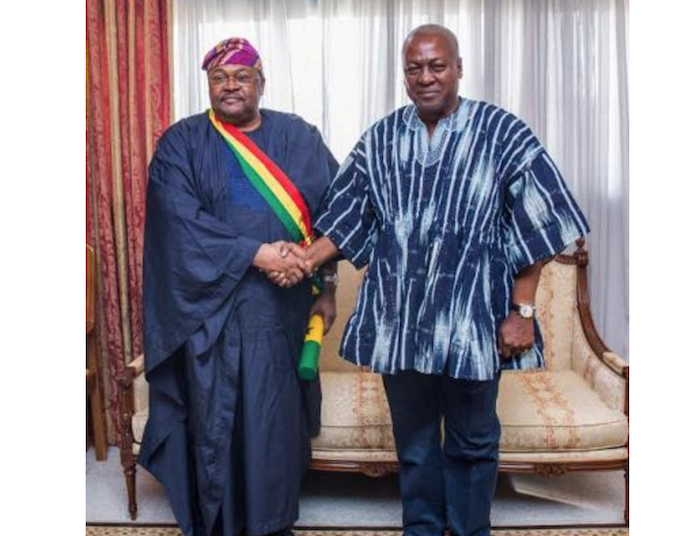 Ghanaian President, Mr John Dramani Mahama, conferred the award on the multibillionaire investor on Saturday, October 29, at the International Conference Centre, Accra, Ghana. President Mahama said Dr Adenuga was honoured for his “unique and outstanding contribution to business enterprise both in Ghana and the continent of Africa at large.”

“Through your creative business exertions, you have touched many lives in Ghana. You have provided employment for our teeming youth, artists, footballers and many more. I am particularly proud of you. This award is our way of saying a simple Thank You,” the President said.

He also commended Adenuga for “transformational achievements in the telecommunications industry”, a major one being the laying of the Glo 1 optic fibre cable linking several African countries including Ghana with Europe and America.

President Mahama equally lauded Dr Adenuga’s contribution to telecommunications in Ghana since Glo Mobile’s launch, and thanked him for the huge investment in the project. The President noted that Dr Adenuga’s investment decisions and his persistent and affirmative support for sports have earned him honours all over Africa. He noted that this was one of the strong reasons that recommended Dr Adenuga for Ghana’s highest civilian honour.

Dr Adenuga, in his acceptance remarks, noted that President Mahama’s

“recognition and support of my modest contributions to the development of Ghana’s economy have come as a great source of pride and encouragement to me. This is more so as it is coming from Your Excellency, whose sterling qualities of leadership I admire greatly”.

Dr. Adenuga’s Glo Mobile is a leading telecommunication services provider in Ghana. Besides providing direct and indirect employment opportunities to thousands of Ghanaians, Glo Mobile Ghana has, since launch in 2012, been the pacesetter in innovation, excellent service delivery and consumer loyalty reward in the country’s telecom market, particularly in the data segment.

The company’s international submarine cable, Glo 1, which landed in Accra in 2009 also opened up a whole vista of unprecedented opportunities for businesses, government institutions and individuals in the country by giving them much better access to more affordable broadband.

Glo Mobile also played a major role in developing Ghanaian football through the sponsorship of the country’s national teams, the domestic football league and the football supporters’ club. The sponsorship lasted for several years.

Back in Nigeria, Dr. Adenuga was in 2012 conferred with the award of Grand Commander of the Order of the Niger (GCON) by the Federal Government. GCON is the highest honour for a civilian who is not in government in the country.

The Federal Government of Nigeria said Dr Adenuga was honoured for his immense contribution to the socio-economic development of Nigeria and the West African sub-region.

“He worked very hard to establish Globacom which today provides hundreds of thousands of jobs in Nigeria, Ghana and Benin Republic. His company has also established footprints in Cote d’Ivoire, Senegal and The Gambia,” the then President, Goodluck Jonathan had said.