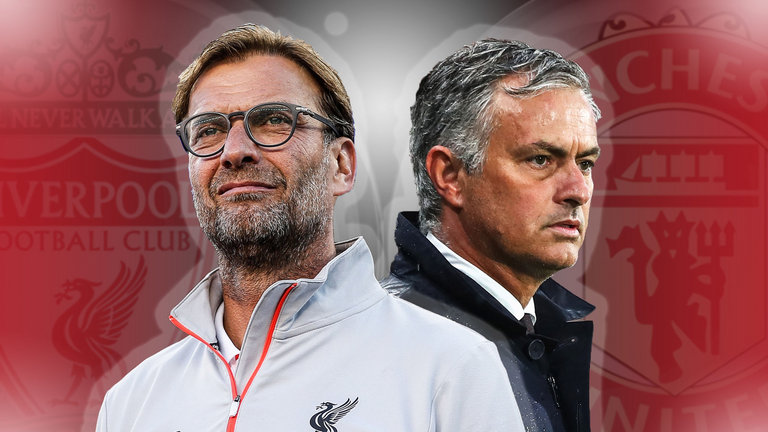 The match will be the first meeting between Jose Mourinho and Jurgen Klopp on English soil and it promises to be a blockbuster based on the quality both sides will be fielding for the match.

United have fallen twice this season to Manchester City and Watford, while the Reds have only lost to Burnley but have beaten big sides this season which includes; Arsenal, Chelsea and Leicester City.

However, Klopp insists criticism of the Portuguese is completely unjustified: “It’s bulls***. No, but rubbish. Who says this? He has started badly at United?

They won their first [three] games. So now you are giving B grades for winning? I try to play similar football to now with my former team and when we faced Real Madrid it was unbelievably difficult to play them.”

Klopp added: “How can I say who is on the way here and who is on the way there?  If I lose against Manchester United you will stand here and ask me: ‘So..what about your ways..?’ I am of course not interested and absolutely not part of the group that says Jose Mourinho was or has been a good manager.”

The coach stressed: “He is a competitor. Without knowing him well, I know he will want to win this game. They are Man United and they have the quality and offensive players who are strong and quick and technically good. They have everything you need to play football.”

He concluded: “ In the end a game can change when one team goes in to the lead or something, so we don’t know exactly what they will do but I am sure they won’t come here to defend only.”

11 Nigerian celebrities who treats their pets like babies (With Pictures)