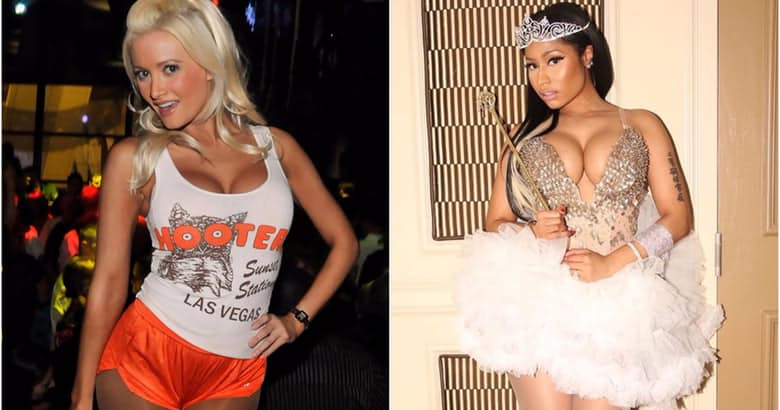 Halloween costumes worn by celebrities – October is a delightful time of year; the trees turn orange, the pumpkin patches bloom and pumpkin spice returns to Starbucks. Woman start to wear leggings again, and it is finally cold enough for them to start wearing their Ugg boots and infinity scarves.

I think that most of us can agree that there are two types of girls that walk this Earth. While some see Halloween as a time to watch scary movies and eat candy, others see it as an opportunity to flaunt their assets in skimpy costumes, and get blackout wasted. Although most men would agree that women who wear less makeup and are more humble tend to make better wives, men are still suckers for a gal who isn’t afraid to strut her stuff and wear close to nothing on the chilly night that is October 31st.

Now, not everyone will spend a fortune on a brand new costume, but if you are a celebrity, and you’ve been invited to a prestigious Halloween party, more often than not you will end up dropping some dough. There are some women celebrities who will choose a scary costume over a form-fitting one, and although that is the point of Halloween, we won’t be focusing on them. Instead, we will focus on the gorgeous celebs that have decided to prove that less is more.

As most celebs and socialites know, Halloween parties are a big opportunity to make headlines. Crowds of paparazzo will line the streets desperately trying to capture Hollywood’s finest in their revealing outfits, and the next day social media will be buzzing over who wore what.

If you’re thinking of dressing up as Katy Perry for Halloween, you’ll have to get in line. This costume is not only easy to accomplish, but it is fun, hot and somewhat popular. If you’re worried about not having the stamina or confidence to pull off this look, then get ready to be blown away by the best piece of advice you have ever received: Drink vodka, and lots of it.

By drinking crazy amounts of vodka, you can literally became anyone you want to be, and you can look good doing it too. If you notice people looking at you on Halloween night, it’s simply because you look dashing. Girl or boy, this is a hilarious costume to wear. However, try to keep in mind, that no matter how much vodka you drink, you probably won’t look as good as Carmen Electra did in red pumps, short shorts, a blue wig and cupcake knockers.