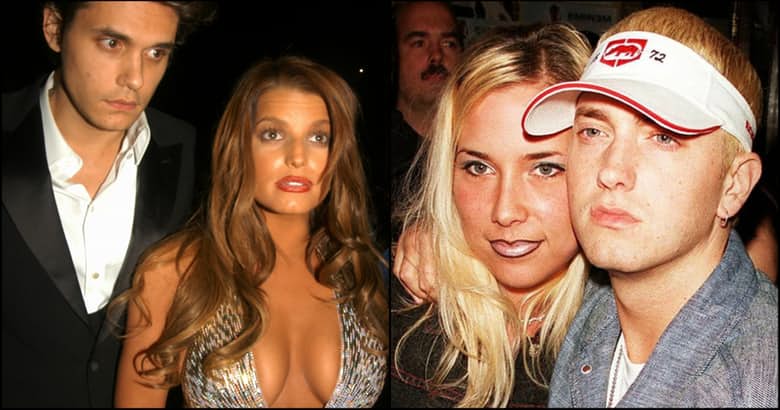 Hollywood celebrities that are very good in bed – Have you ever had a former scorned lover call you out for your lovemaking skills? Of course not buddy, you’re just a love machine after all! But imagine if they did. Just how humiliating must that be? Now imagine if you’re a famous celebrity and your former lover is now burning your lovemaking skills all over the internet. That’s the reality for half of our list as you check out 20 celebrities: Duds or Studs in the bedroom.

The other half you may be more familiar with in terms of your lovemaking abilities, as we’ve got what appears to be the 10 best lovers below in Hollywood. These celebrities not only rock it in front of the camera but when the camera is off too! (Though for some of them, who says the camera goes off?)

Several prominent relationships are covered below: Pitt/Jolie, Brand/Perry, Eminem/Mathers, Sudeikis/Wilde, Hefner/Harris (and Hefner/St. James!) and Sheen/Bree Olson (Former adult star) are just some of the relationships who have had one (or both) partners open up about how things were under the sheets, and you better believe we have those quotes below. Then, of course, we’ve also got some celebrities that have openly bragged (or insulted!) their ability to make the beast with two backs! Last but not least, we’ll also include which memento Gene Simmons has taken from the roughly 5,000 women that he’s invited to bed.

We also cover some other celebrities who have slept with groupies or adult performers, a situation that does not always play out well, especially if you suck in bed (as 50 Cent learned).

Talk about the pressure being on to make sure you are also being a star in the bedroom!

We’re going to start out the list with perhaps the most awkward one imaginable. Hugh Hefner and Crystal Harris have had a complicated relationship, including her leaving him before their wedding in 2011, but they recently reconciled and got married earlier this year.

Yet during their break, Crystal Harris went on Howard Stern and dished some unpleasant things about Hefner, saying “He doesn’t really take off his clothes. I’ve never seen Hef naked. Then I was just over it. I was like, ‘Ahhh.’ I was over it. I just like, walked away. I’m not turned on by Hef, sorry.”

Crystal did not stop there, also saying that he would only last a few seconds when any contact was able to be made.

Considering she is one of the most popular Playboy models of all time, you can imagine she was extra frustrated at Hefner’s inability to deliver in the bedroom.

Let’s hope she got him some lessons before they tied the knot! Keep scrolling and you’ll also see that Harris is not the last former Playboy playmate to call out Hefner.

John Mayer is definitely no stranger to dating some of the most beautiful and popular women in Hollywood, including Minka Kelly, Jennifer Aniston, Katy Perry, Taylor Swift, Jennifer Love Hewitt and Jessica Simpson. Of all of those women listed, it is Jessica Simpson that was evidently so amazing in bed that Mayer just could not keep his mouth shut about it, saying “Yeah, that girl is like crack cocaine to me… Sexually it was crazy. That’s all I’ll say. It was like napalm, sexual napalm … Have you ever [had sex] with a girl who made you want to quit the rest of your life?”

We suppose it’s a good thing for him that the relationship did not last, as it may not have paid quite as well to spend his days in bed with Simpson.

13 American Presidents who were completely against Lesbians, gay and bisexual laws (With Pictures)