Who killed Kudirat?? Al-Mustapha opens up about loyalty to Sani Abacha (Must Read) 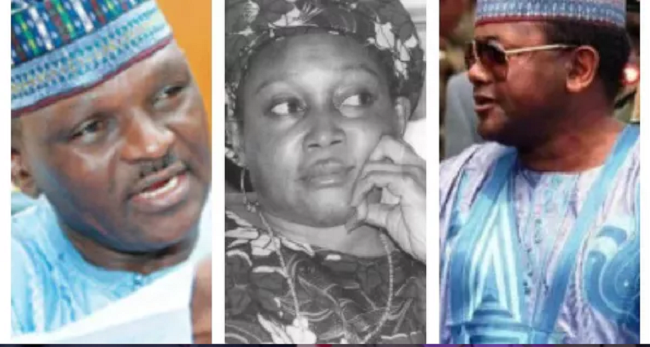 Mustapha opens up about loyalty to Sani Abacha – Major Hamza Al-Mustapha insisted that his role during Abacha’s administration was to offer protection – He denied killing Kudirat Abiola as widely speculated – The former military officers urged Nigerians o work together for progress.

Major Hamza Al-Mustapha has spoken about the death of Kudirat Abiola and has denied his involvement in her demise.

Al-Mustapha served as the chief security officer to the late General Sani Abacha and has been linked to the death of the wife of Moshood Abiola the winner of the presidential election in 199 which was later annulled by General Ibrahim Badamasi Babangida.

Vanguard reports that Al-Mustapha spoke at the Dr. Fredrick Fasehun annual public lecture in Akure on Wednesday, November 9 where he exonerated himself of the death of Kudirat.

He said: “I am often misrepresented, I discharge my duties as required which was to protect the Head of State, protect the government and the people of the country.

The former military officer called on all Nigerians irrespective of political affiliation to come together for a better Nigeria.

He said: “There is so much turbulence, greed and selfishness. We take two steps forward, four steps backward.

”My concern is patriotism and true love for the country our desire is to invest and allow our institutions to stay rather than forcing them into decay. That is what we should be cautious about.

“Those in leadership and those being led particularly those who have attained statesmanship position should understand there is heavier responsibility on their shoulder and they should realize that this country is too important to be allowed to fail. We must support all those in power.’’

He also spoke about the anti-corruption was championed by the administration of President Muhammadu Buhari and described it as difficult.

He said: “Anti corruption war is not easy as it is being said, we saw it in the past administrations.

“But before you start the anti corruption war itself, there are measures to take. One is to heal the wounds; two, corruption has eaten deep so it is going to be a combination of many things, moral law, science and force.

“And those who are stealing should realize law is hot water, if you dare put your hand in hot water, you will get burnt and when it is burnt you have no one to blame. This is where we are and this must be done.”

Unbelievable! Hunters kill giant snake and what they found in it’s belly will shock you! (See Photos)