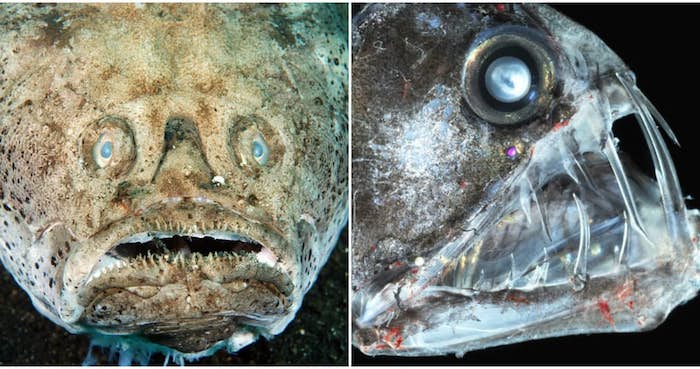 This means they may look horrendously spine chilling to us humans, but they have found the perfect adaptation to suit their environment. While many of these creatures simply look frightening, what is truly blood curdling is the way that many of them need to hunt to survive. These are the creatures in the darkest depths of the ocean, if you saw them you’d probably scream, but this is the thing about the ocean— no one can hear your cries for help under all of that water, so good luck with that. Let’s take a deep exploratory dive into the creepiest, scariest creatures of the ocean.

The existence of the Stonefish is proof that you don’t need to be the biggest to be the baddest creature in the sea. At an average size of 30 to 40cms and weighing in at around 2kg (or five pounds), the Stonefish is the most venomous fish in the entire world. There are five different species of these fish who are native to the coastal regions of the Indo-Pacific oceans. Although they have 13 spines filled with venomous sacs, this is not how they kill their prey. They’re actually shockingly fast, being capable of an attack in 0.015 seconds flat despite moving very slowly when they aren’t on the hunt! Stonefish won’t attack people, however, humans are in most danger when they step on the Stonefish’s spine, releasing the venom. If you suspect you’ve stepped on a stonefish seek medical attention right away, the venom can cause intense pain, heart failure, and death if not treated. Another terrifying fact about this creature is that it can live for up to 24 hours out of water, so watch where you step both in the sea and on land.

Top Post Today: 7 ways to reply when you are insulted, #5 is a must practice