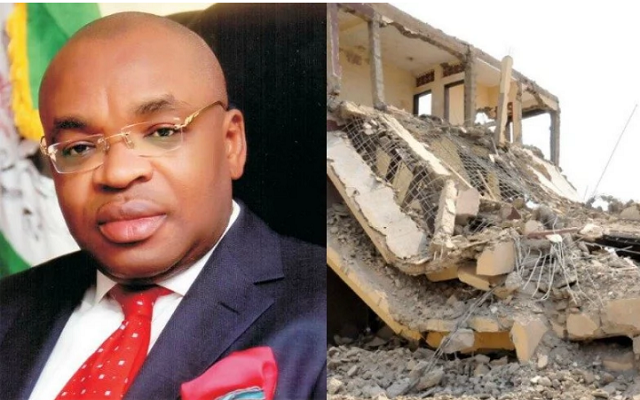 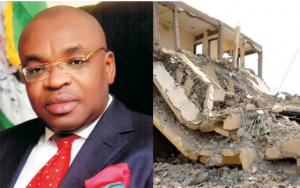 The church was said to be filled to its capacity following the consecration of its pastor as a Bishop when the incident happened.

The death toll from the collapse has hit 100, and is likely to rise to 200, reports said. Punch also reports that scores of worshipers are trapped in the rubble.

Meanwhile, we gathered that the death toll is likely to increase following the effect of the collapse.

“Pastor Akan Week was being consecrated today so the programme was holding inside the Church when suddenly, the whole building collapsed,” a witness said.

He said the church was being renovated due to the expectation of its growing worshipers.

The witness also said many people were buried under the debris of the collapse.

It was gathered that the state governor was supposed to grace the occasion but was not at the church when the building caved in.

“The governor has gone to the scene and is presently there helping with the rescue,” a witness said.

Also, sources have said that many victims of the collapse were taken to nearby hospitals and mortuaries in Uyo.

Another witness said many of the injured persons were already receiving medical attention.

Meanwhile, the emotional spokesperson of the police in the state said: “You need to be here to witness it, there is so much confusion.”

It would be noticed that a similar large-scale collapse happened in Lagos at the SCOAN in September 2014. 115 worshipers lost their lives.

The state governor has also promised an investigation into the collapse.

The governor said, the investigation would help ascertain when safety standards were comprised during construction of the building.

Also, mortuaries in the city is said to be currently over flooded due to the number of casualty from the incident.

According to Daily Trust, Sani Datti, NEMA’s head of media and public relations, while spesking in Abuja said that 115 persons were injured as a result of the incident.

Datti also explained that the emergency response team conducted a 360 degree search at the scene, both in and outside the church, adding that no casualty was left behind.

He also noted that all the patients with head injuries have been evacuated from private clinics to specialist hospitals.

LADIES: Here’s how to attract a Rich and Classy man