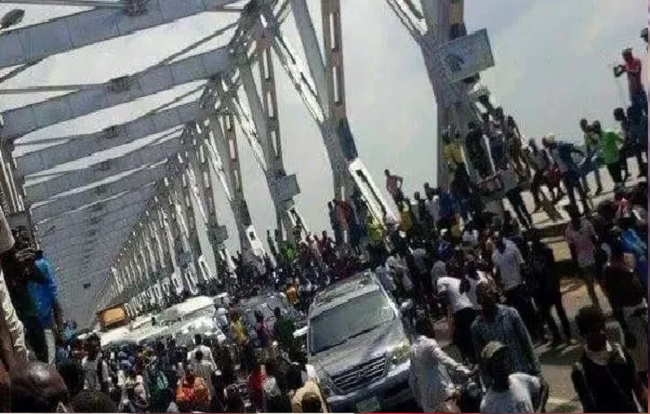 Panic in Onitsha as soldiers block Niger Bridge – The Nigerian Army has mounted a blockade on the famous Niger Bridge in Onitsha – This has caused panic and uproar in the South-east – Several groups have condemned the Army’s action.

The ‘Operation Python Dance’ recently launched by the army in the South-east to provide security in the zone have given room to a blockade on the famous Niger Bridge in Onitsha.

The move have caused panic among residents in the area and outrage among interest groups in the region, Daily Sun reports.

The chairman of International Society for Civil Liberties and the Rule of Law (Intersociety), Emeka Umeagbalasi described the army’s action as a declaration of Jihad against the South-east.

He called on the federal government to prevail on the Army authorities to immediately dismantle the road blocks, adding that the Army’s internal security should not translate to psychological war against the Igbos, especially at a period it is known they return home to celebrate Yuletide

“The Army’s occupation is nothing but a plot to subject the entire South-east to untold hardship, torture and extortion,’’ Umeagbalasi alleged.

He questioned why the Army did not take the same action after the recent killings in Southern Kaduna and the several mayhem perpetuated by Fulani herdsmen.

He also stated that the road blocks were already creating hardship for the people of the South-east, adding that untold suffering and waste of several man was the order of the day.

On its part, the Civil Liberties Organisation (CLO) described the Army’s action as provocation, particularly when those allegedly murdered by the soldiers in the wake of peaceful demonstrations by pro-Biafra groups have not been accounted for.

Meanwhile, Movement for the Actualisation of the Sovereign State of Biafra  (MASSOB), said the Operation Python Dance was another dimension of the war by Buhari-led administration against Ndigbo.

“For the military, it’s a fertile land and opportunity to create tension among our people which they think will derail the love, confidence and consciousness of Biafra,” a statement from MASSOB noted.

In a related development, Mazi Nnamdi Kanu, the embattled leader of the Indigenous People of Biafra (IPOB), has been denied another chance at freedom.

Kanu’s case was decided by Justice Binta Nyako of the Abuja Division of the Federal High Court, Thursday, December 1.

Justice Nyako declined to release the detained leader of the IPOB leader on bail.

How Yataka Indimi broke Nasarawa First Lady’s arm during fight at Zahra Buhari’s introduction – You need to see this!