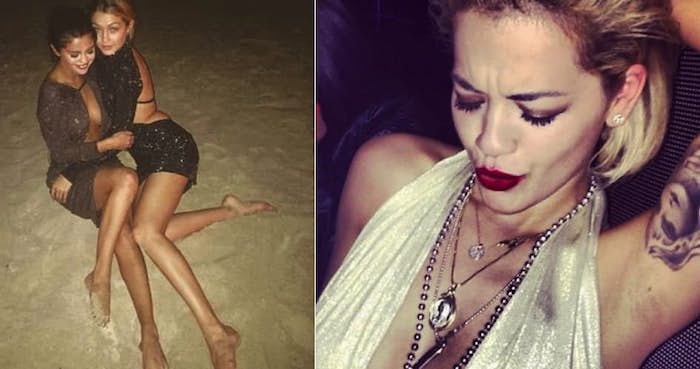 Leaked photos of celebs: On New Year’s Eve, people across the world party like crazy to usher in a new year. It doesn’t matter if you are a famous celebrity or a nobody, when that ball, peach, or whatever it may be drops, the party is banging. Half of the world may choose to wash last year away with a massive party, while the other half is content to stay at home and watch it all unfold on TV and online.

We love to watch celebs get wild on New Year’s Eve. They bring in the new year on a grander level and with way less privacy. On this day even the more conservative celebs finally let go. They get turnt up, hammered, sloshed, wasted, or as we like to call it, out of control!

Celebs lose control on beaches in Dubai. They lose control in posh ballrooms and VIP clubs. They lose control while throwing massive parties at private estates. Celebs have the resources to get out of control anywhere, with tons of friends and only the finest, top-shelf refreshments. They may have had plans to party for just one night, but these pictures of their exploits can be viewed forever. And there’s nothing wrong with that. So, lets get the party started.

Paris Hilton and Nicky Hilton have been tag-teaming their New Year’s hosting responsibilities for years. Almost every year the duo team up looking extra hot and ready to party. There were actually quite a few options showing just how out of control the girls could get on New Years. However, this photo of them ushering in 2008, seemed to be the one where the hotel heiresses were having the best time.

Paris had a particularly nasty year in 2007, as it was earlier that year that she was sentenced to 45 days in jail. She had broken her probation terms, following an alcohol fueled reckless driving incident. Paris was released after only 5 days due to an undisclosed medical issue, but was quickly ordered back into the system to finish the term. In the meantime, Nicky Hilton went from hysterics over the sight of her sister at a jailhouse visit, to buying a Hollywood Hills mansion.

Prev post1 of 10Next
Use your ← → (arrow) keys to browse
Tags: countdownentertainmentphotos
Share13Tweet8Pin3SendShare