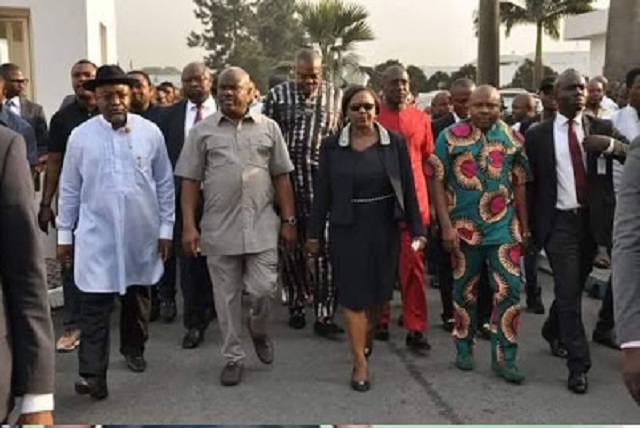 Nyesom Wike leads state residents in protest – Thousands of Rivers state residents led by the state Governor, Nyesom Wike, today took to the streets to protest the alleged mass killings by the Police and other security agencies during the December 10 rerun elections.

The peaceful protest march took off from Government House, Port Harcourt at 8am, moved through Azikiwe Street and Bank Road before terminating at the Rivers State Police Command headquarters on Moscow Road… 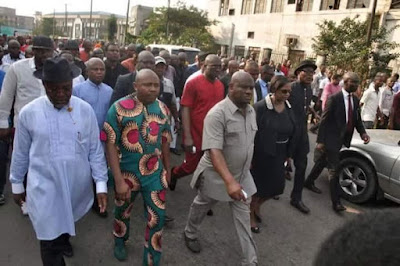 As the thousands of protesters approached the gate of the Rivers State Police Command headquarters, the policemen ran into their premises, closed their gates and peeped from the openings of the gate.

Governor Wike and the other leaders waited patiently for close to 30 minutes before the Deputy Commissioner of Police, Mr Cyril Okoro came out. Even then, he spoke through the gate.

Addressing the Police, Governor Wike said that the people of Rivers State were at the Police Command to inform the authorities that they were tired of the killings of innocent people in the state by the police and other security operatives. 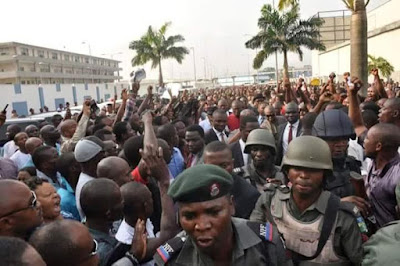 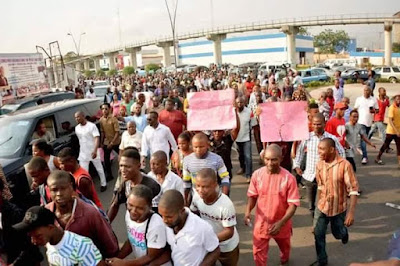 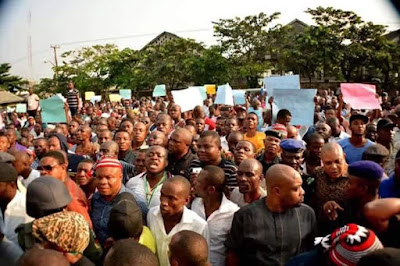 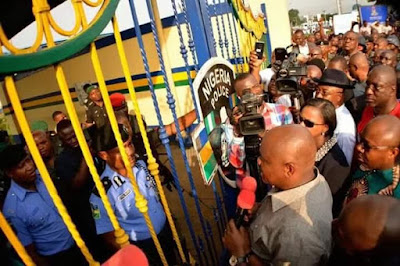 He noted that the people and Government of the state were particularly dissatisfied with the recklessness of two Senior Policemen, the Assistant Commissioner of Police in charge of Operations, Steven Hasso and the Commander of Special Anti-Robbery Squad, Mr Akin Fakorede who led the sponsored onslaught against the people of Rivers State and compromised the security architecture of the state.

“On behalf of the Rivers State Government and the good people of the state, we have to let the police know that enough is enough. We demand that the Assistant Commissioner of Police in charge of Operations, Steven Hasso and the Commander of Special Anti-Robbery Squad ( SARS) Akin Fakorede must leave the state. Since you don’t want to protect the state and you want to be politicians, you have gotten the votes you want to get, you have also gotten the seats you want to get, you can now leave the state.”

I cannot write again, since I have done that repeatedly. Please, I don’t want my people to die anymore. I don’t want armed robbers posted as senior police officers to Rivers State”.

He noted that the Police High Command has refused to act despite the overwhelming evidence against the duo, especially the video footage that showed Akin Fakorede and other security operatives trying to snatch results of the Rivers East Senatorial District.

The governor said the situation where security officials have transformed into politicians in uniform is quite unfortunate.

In his response, Deputy Commissioner of Police, Cyril Okoro assured the governor that the Rivers State Police Command will pass the message to the Police High Command for necessary action.