Soldiers revolt against their superiors in Borno state 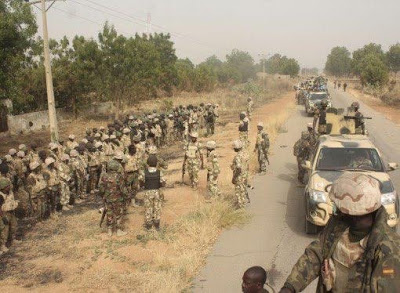 Soldiers revolt: Aggrieved soldiers at the 21 Brigade of the Nigerian Army are currently on rampage over allegations of mistreatment and insincerity on the part of some of their senior officers. According to Premium Times, the soldiers this morning began to shoot indiscriminately into the air and even threatened to kill any senior officer who comes out to stop them. A military source in Borno who spoke on condition of anonymity said;

“The brigade is based in Bama but is currently deployed at Bula Bello in Sambisa for Operation Rescue Final. But suddenly soldiers started mutinying at 6AM today, firing in all directions and threatening to pull out of the operation. As some of them fire gunshots, some started preparing vehicles to move out of location. They also warned officers to steer clear or they would be shot dead. They are saying their commanders have been treating them badly and telling them lies. As I speak to you, the firing is still going on, and there is confusion everywhere.”

This is not the first time soldiers are revolting against their superiors. In May 2014, angry soldiers at the newly formed 7th Division of the Nigerian Army in Maiduguri revolted against their boss, Major General Abubakar Mohammed, shooting sporadically.