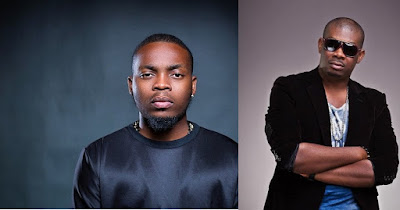 Scandals kicked off on the very first day of the year. At the 2015 Headies, which actually took place on the 1st of January, 2016, there was a lot of drama that led to two power houses in the Nigeria music scene going head to head.The brouhaha started when Mavin artiste, Reekado Banks won the coveted Next Rated Artiste Category.  This obviously didn’t go down well with Olamide whose YBNL artiste, Lil Kesh appeared a bigger favourite in the run up to the show to win the award.
Olamide used his time on stage to throw shade at the event organisers for not giving Lil Kesh the award. He said this while using profanities as he listed all the hit songs Lil Kesh had produced that year alone. Not long after, Don Jazzy used his own opportunity on stage to get back at Olamide. He said, “Egbon Olamide, if you want the car, come and collect it.” Their war of words continued online where Olamide used Twitter to threaten Don Jazzy.

Days later, the whole fight was squashed, or at least made to look like it was. Billionaire, Aliko Dangote called up the two music titans and settled the rift. The two were seen taking pictures together.