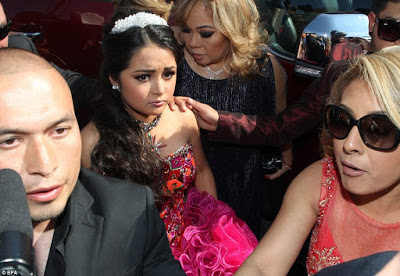 A Mexican teenager, Rubi Ibarra Garcia’s, almost had her quiceanera (15th birthday party) ruined after thousands of people showed up at her birthday party, most of whom were strangers. Her Dad had made an invitation on Facebook inviting people to his daughter’s quiceanera but forgot to make the event a private one. The Ibarra García family had more than 1.3 million people respond to say they would attend the celebration in La Joya, Mexico after the video went viral.

In the 45 second clip, Rubi’s parents Crescencio and Ana Elda, stood on either side of her while her father calmly extended an invitation to her birthday party to everyone. Her father said in Spanish:

‘Hello, how are you doing? We invite you on December 26 to our daughter’s Rubi Ibarra Garcia’s quinceañera party’ He also listed what bands will play at the blowout in the town.

Over 1.3 million people RSVP’d to attend Rubi Ibarra García’s 15th birthday on December 26 fortunately or unfortunately, only a little over one thousand people showed up at the party in the small village of La Joya, San Luis Potosi State, Mexico. However, those thousands of people including local media, still overwhelmed Rubi and her family.

Rubi took to her Facebook page and wrote in Spanish:

‘To all who have arrived I ask you please do not despair because we are really many people and we are just seeing how to speed things up,’

‘I just ask for your patience so that we can all enjoy this party that was made for all of you.’

Local media reported that the family were ‘annoyed with the media and with the people who do not respect the rules that they had established.’

The 15-year-old had become a local celebrity after her parents’ Facebook invite went viral.