Video of LASTMA official stoned to death by mob in Apapa 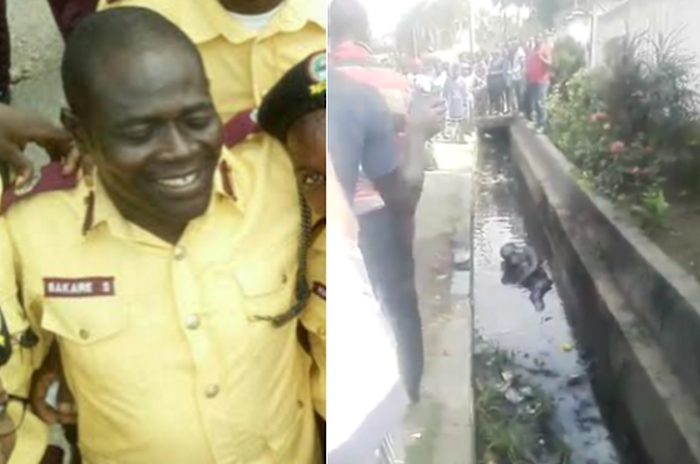 LASTMA official stoned to death: Tajudeen Olatunji Bakare, an officer of the Lagos State Traffic Management Authority (LASTMA), Apapa, was beaten to death by okada riders and touts on Thursday, 15th December, 2016. A graphic video of the gruesome murder has now surfaced online. The late officer can be seen lying helplessly inside a gutter, as an irrate mob stoned him to death.

Addressing the press, the Lagos state’s acting Commissioner for Transportation, Prince Anofiu Elegushi said the victim was killed while performing his lawful duties of making Apapa safe for motorists and commuters, and alleged that the mob action was carried out by Tanker Drivers, Okada Riders and other persons who live around them,.

Elegushi, who addressed the briefing alongside the Chief Executive Officer of LASTMA, Mr. Chris Olakpe and the General Manager of the Agency, Bashir Braimoh, said the officer was killed for an incident he knew absolutely nothing about.

“Officer Bakare did not lose his life to an accident. No. His life was taken by persons whose only response to an incident is to resort to jungle justice, even when they were not sure of the play of event. Our officer was murdered by blood thirsty hounds who parade themselves as purveyors of transportation,” Elegushi said.

Hottest freshers in Afe Babalola University for 2016 – These guys are hotties! (With Photos)