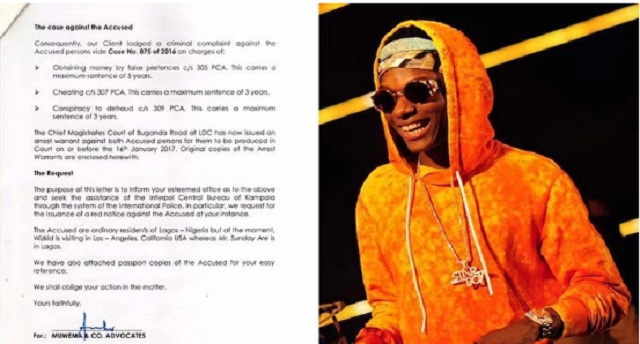 Wizkid faces 11-year jail term in Uganda – Over 25,000 Ugandans had paid for tickets in anticipation of Africa’s biggest musician of 2016.  Nigerian pop star Wizkid has been issued an arrest warrant for cancelling his Uganda concert recently.

The Nigerian pop star missed the concert scheduled to take place on Saturday, December 3 at Lugogo Cricket Oval in Kampala.

He was unable to fly into Uganda from USA due to ‘unavoidable circumstances’ according to the organisers.

‘Between 29th August 2016 and 29th November 2016, our client (Face TV) paid to Mr. Sunday Are, Wizkid’s manager the full performance fee of US$60,000, a brokerage fee of US$5,000 and US$3,000 being per diem for the days they were going to stay in Uganda,’ documents filed by the Chief Magistrates Court of Buganda detailed.

Over 25,000 Ugandans had paid for tickets in anticipation of Africa’s biggest musician of 2016.

Organisers of the event, Face TV, lodged a criminal complaint against Wizkid and his manager vide Case No. 875 of 2016 on charges of:

1. Obtaining money by false pretences, which carries a maximum sentence of five years

3. Conspiracy to defraud which also carries a maximum of three years.

The court documents further reveal that substantial expenses in booking and re-booking flights, hotel, venue, advertising and promotions for the concert grossed over $300,000 (over N144m).

Wizkid, who is presently tending to health issues in the US, and his manager, Sunday Are, have been issued an arrest warrant to be produced in court on or before January 16, 2017.

On December 9, the ‘Ojuelegba’ singer announced via Twitter he’s cancelled his homecoming concert due to health reasons.

‘I’ve been on the road for 2 years touring and doing what I love without a break,’ he said. ‘And now it’s all catching up on me.’

The Starboy homecoming concert was planned to take place at Eko Convention Centre on December 30, followed by a show at the New Afrika Shrine on January 1, 2017.