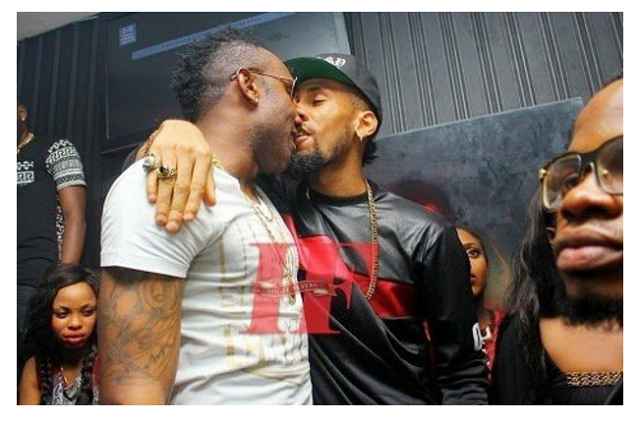 So they are likely mere rumours. He was rumoured to have dated Uti Nwachukwu. He’s rumoured to be datingIK Ogbonna currently.Alexx addressed his rumoured gay affair with Uti then:

Your relationship with him has been tagged a romantic one on several occasions with people insinuating that you are gay partners. How do you feel about this?

It’s hilarious! Back in the days, when you have a friend who you go out with often, it was cool, people called him your best friend. Now, when they see twoguys together, people begin to have weird thoughts.You see, in this business of entertainment, what you need is someone that believes in you to grow. Uti is big, and he helped me a lot prior to now that I’m beginning to gather my momentum. He is a ‘BigBrother Africa All Stars’ Winner. You can hate him but you can’t take that away from him. A lot of these local celebrities, outside Victoria Island nobody knows them. Uti is someone who grandmothers and pepper sellers know. We were in Ghana recently and the President of Ghana saw Uti at the Airport and recognized him. You can’t hate on success.

Where do you think the rumours originated from?

I don’t care and I am not bothered. Nigerians have what I call the crab mentality. Have you seen a bunch of crabs in a bucket? When one is trying to come out, the others pull it down. If these insinuations were true, by now there should be a picture to prove it. Look at most successful Nigerian entertainers, they were either tagged gay or Illuminati which I find weird. You see some girls acting their lives away on TV and people tag them as “runs girls”. Almost every young, successful entertainer has a negative tag and it is disheartening.

The word on the streets is that you both live together. Is that true?

Yes we do. But is it anybody’s problem who I live with or who Uti lives with? We all know how expensive it is to live in a highbrow area in Lagos. If you have a friend who youare getting along with and you want to live with each other, is that anybody’s problem?

How does this rumour affect your career?

It doesn’t affect my careerbecause to me, I am just living my life. I’ve never come out to refute anything because I don’t owe anybody any explanation. It’s my life.”