Arik Air reacts to its Lagos managers beaten by passengers 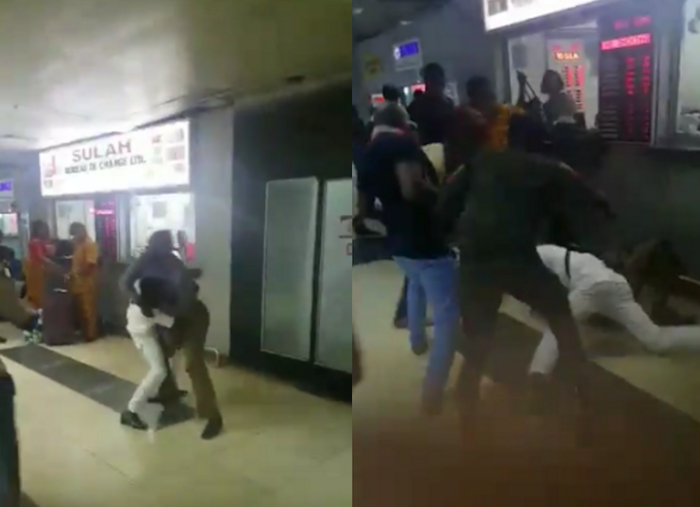 The airline has released a statement condemning the attack on one of its managers by angry passengers at the Murtala Mohammed International Airport two days ago (Read here). In a statement signed by its Communications Manager, Ola Adebanji, the airline said the verbal and physical attack on its staff and the destruction of some of its properties by frustrated passengers, is unacceptable and will be legally addressed.

According to Adebanji, trouble started when the airline’s Lagos-New York flight was rescheduled from Wednesday to Thursday due to the shortage of aviation fuel.

This is a press statement from Arik Air below…

Our Lagos-Johannesburg service and Lagos- Accra service were also on ground awaiting fuel while the Lagos-New York service was standing by for fuel. Aviation fuel supply has been epileptic in the country over the past weeks where availability of stock and terms of service are not guaranteed on a consistent basis by the marketers.

Arik Air pursued all possible options to source fuel for the international flights on 4 January, 2017 but when our Customer Service Manager at the Murtala Muhammed International Airport, Lagos approached the passengers to explain the situation to them, one of the passengers chased and attacked him. This was followed by a mob of passengers who brutally beat, kicked and chased the Arik Air staff throughout the terminal building leading to the Immigration Section of the terminal. The staff was later rushed to the hospital where he was treated for injuries sustained during this reckless and inhuman attack.

Arik Air managed to source a small quantity of fuel and despite eventually sorting out the departure of the Johannesburg service, some of the passengers from the affected services damaged the check-in counters, check-in systems and equipment, preventing the airline from being able to service or checking-in passengers on 5 January, 2017.

Again on 5 January, 2017 some of the passengers continued to disrupt the airline’s check-in process by preventing Arik Air staff from performing their duties by sleeping on the conveyor belts, sleeping or sitting on the floor in the check-in area and forcibly occupying the airline’s ticketing and administrative offices, resulting in the cancellation of some of the international flights, including the Lagos-London Heathrow-Lagos service.

Arik Air strongly condemns the incessant and increasing number of attacks on our staff and property in the recent months. As a flag carrier for Nigeria, the airline expresses it disappointment and dismay that the Aviation Security department (AVSEC) of the Federal Airports Authority of Nigeria (FAAN) and all the other security agencies in the country cannot ensure or guarantee the safety of our personnel when on duty across the various airports in the country. This serious breach of security and lawlessness by some of the passengers to assault and cause bodily harm to the airline’s personnel cannot and will not continue to be tolerated.  Passengers continue to take the laws into their hands and the severity and frequencies of such criminal acts are on the rise due to lack of appropriate action or preventative measures from the security agencies.

The resort to verbal or physical violence in any form by a passenger is not acceptable to Arik Air and the airline would henceforth deploy all measures necessary against any passenger who takes the law into their hands. Arik Air will also pursue legal action and engage local and foreign security agencies including private security firms to investigate, identify and prosecute to the full extent of the law all of those passengers in Nigeria and overseas, involved in the attacks against our personnel and property. The airline also intends to formally address the regulators, security agencies and aviation authorities both in Nigeria and overseas to get an immediate resolution to this matter.

Security at our airports ought to be improved to guide against unwarranted and uncalled for assaults on airline personnel and passengers. Despite repeated appeals and calls for intervention on numerable occasions, the airport authorities and security agencies have done nothing to protect the lives of staff and property of Arik Air in the wake of these attacks. The same authorities are however spontaneous in sanctioning the airlines whenever there is a service disruption without providing adequate support or security to prevent passengers from disrupting the service in the first instance.

Arik Air once again makes a final appeal to all the security agencies (AVSEC-FAAN/Nigerian Armed Forces/Directorate of Security Services/Nigerian Police Force) in the country to intervene immediately and protect the airline personnel and property from unwarranted attacks by passengers. Arik Air also appeals to its passengers to be civil and refrain from such disruptive and unlawful actions that risk the life of airline staff and that of fellow passengers.

Arik Air is fully committed to the safety and security of its passengers, staff and assets and will do all possible within its means to pursue and prosecute to the full extent of the law, all perpetrators of such criminal acts against the airline.