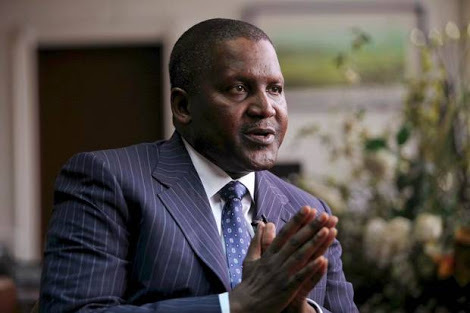 While the world’s wealthiest people are ending 2016 with $237 billion more than they had at the start of the year, Africa’s richest man, Aliko Dangote is sadly not part of the party as he lost a whopping $4.9 billion of his fortune.

The industialist who was formely the world’s 46th-richest man, dropped out of the top 100 list to No. 112 with a total fortune of $10.4 billion. The drop according to reports was due to falling oil prices and naira devaluation.

According to the Bloomberg Billionaires Index, disappointing economic data from China at the beginning, the U.K.’s vote to leave the European Union in the middle and the election of billionaire Donald Trump at the end, saw the biggest fortunes on the planet whipsawed through $4.8 trillion of daily net worth gains and losses during the year, rising 5.7 percent to $4.4 trillion by the close of trading Dec. 27.

Check out the first set of marriage proposals in 2017 (Photos)