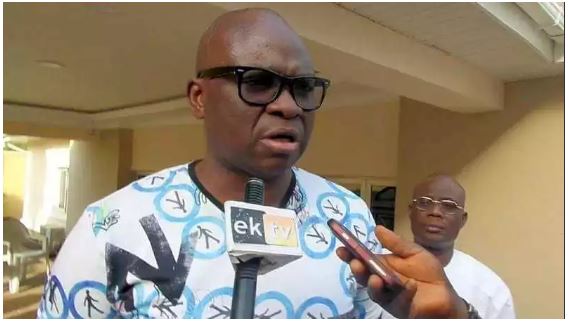 Governor Fayose has described the payment of N5000 to poor people as a propaganda. The Ekiti governor claimed his people have not received any payment from the federal government. He said he pays N10000 to poor people in his state Governor Ayodele Fayose has challenged President Muhammadu Buhari to publish the names of those who have received the N5000 stipend the federal government claimed it has paid.

The federal government announced that it has started disbursing the N5000 stipend which was promised to poor Nigerians by President Buhari.

Fayose challenges Buhari over N5000 paymentOne million most vulnerable Nigerians will be rewarded with a N5,000 monthly stipend through the Conditional Cash Transfer (CCT) of its Social Investment Programmes (SIP).

The Tribune reports that, the presidency announced that the government has begun the payment.

Laolu Akande, the Senior Special Assistant on Media and publicity to Vice President Yemi Osinbajo disclosed that the implementation of the programme was part of the Muhammadu Buhari administration’s determined efforts to touch the lives of Nigerians positively.

The Punch however reports that that Governor Fayose challenged the president to make public names of those who have received as Ekiti people have not received anything yet.

Fayose claimed only All Progressives Congress (APC) states will agree that they have received payment.

“A blind man will say it is when it gets into my mouth that I will say you are feeding me, not promises.”

Fayose accused the APC of focusing on 2019 rather than making the country better and said the project was a World Bank own with payment made since 2016.

The governor said he was already paying poor people N10000 in Ekiti without delay.

“Federal government’s N5,000 payment to the poor was designed in a way that the state governors are also involved because they are to clear and present prospective beneficiaries before payments are made.”