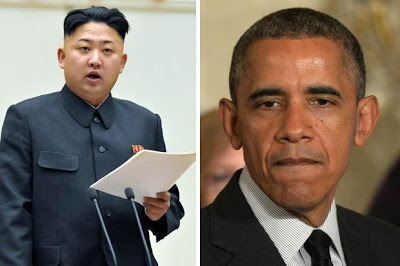 The very secretive state of North Korea has told U.S President Barack Obama to focus on leaving the White House rather than North Korea’s track record of human rights abuses after the US Department of the Treasury’s Office of Foreign Assets Control (OFAC) on Monday imposed additional sanctions on North Korea for it’s flagrant abuse of human rights.
More..
The sanctions by OFAC  which includes blacklisting seven North Korean citizens, North Korea leader Kim Jong-un’s sister among them, were being enacted alongside the United State Department’s “Report on Serious Human Rights Abuses or Censorship in North Korea,”
In November, a report was released showing satellite images of up 120,000 people including children as young as 7 subjected to forced labor, torture, starvation, rape and death and a 2014 UN report estimated that “hundreds of thousands of political prisoners” have died in North Korean.
KCNA, North Korea’s run media agency swiftly reacted to the U.S’ sanctions saying:
“The Obama group can hardly have a sound sleep, seized with the extreme uneasiness after facing the undeniable strategic setback. Worse still, they are hit hard by the public. Much upset by this situation, the Obama group have gone so foolish as to kick up the ‘human rights’ racket against the DPRK.”
“The US is not qualified to talk about somebody’s ‘human rights’ as it is the world’s worst human rights abuser and a tundra of human rights.
“Obama would be well advised not to waste time taking issue with others’ ‘human rights issue(s)’ but make good arrangements for packing in the White House.
“He had better repent of the pain and misfortune he has brought to so many Americans and other people of the world by creating the worst human rights situation in the US during his tenure of office.”
Amnesty International said in a statement:
“The inmate population has been gradually eliminated through deliberate starvation, forced labor, executions, torture, rape and the denial of reproductive rights,”
“These camps constitute the cornerstone of the country’s large infrastructure dedicated to political repression and social control that enables widespread and systematic human rights abuses”.