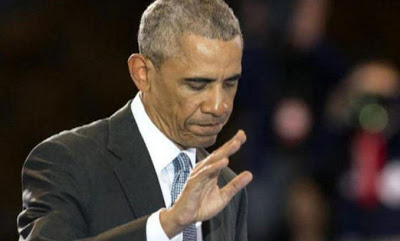 Obama’s farewell address: It’s good to be home. My fellow Americans, Michelle and I have been so touched by all the well-wishes we’ve received over the past few weeks. But tonight it’s my turn to say thanks. Whether we’ve seen eye-to-eye or rarely agreed at all, my conversations with you, the American people — in living rooms and schools; at farms and on factory floors; at diners and on distant outposts — are what have kept me honest, kept me inspired, and kept me going. Every day, I learned from you. You made me a better President, and you made me a better man.

I first came to Chicago when I was in my early twenties, still trying to figure out who I was; still searching for a purpose to my life. It was in neighborhoods not far from here where I began working with church groups in the shadows of closed steel mills. It was on these streets where I witnessed the power of faith, and the quiet dignity of working people in the face of struggle and loss. This is where I learned that change only happens when ordinary people get involved, get engaged, and come together to demand it.

After eight years as your President, I still believe that. And it’s not just my belief. It’s the beating heart of our American idea — our bold experiment in self-government.

It’s the conviction that we are all created equal, endowed by our Creator with certain unalienable rights, among them life, liberty, and the pursuit of happiness.

It’s the insistence that these rights, while self-evident, have never been self-executing; that We, the People, through the instrument of our democracy, can form a more perfect union.

This is the great gift our Founders gave us. The freedom to chase our individual dreams through our sweat, toil, and imagination — and the imperative to strive together as well, to achieve a greater good.

For 240 years, our nation’s call to citizenship has given work and purpose to each new generation. It’s what led patriots to choose republic over tyranny, pioneers to trek west, slaves to brave that makeshift railroad to freedom. It’s what pulled immigrants and refugees across oceans and the Rio Grande, pushed women to reach for the ballot, powered workers to organize. It’s why GIs gave their lives at Omaha Beach and Iwo Jima; Iraq and Afghanistan — and why men and women from Selma to Stonewall were prepared to give theirs as well.

So that’s what we mean when we say America is exceptional. Not that our nation has been flawless from the start, but that we have shown the capacity to change, and make life better for those who follow.

Yes, our progress has been uneven. The work of democracy has always been hard, contentious and sometimes bloody. For every two steps forward, it often feels we take one step back. But the long sweep of America has been defined by forward motion, a constant widening of our founding creed to embrace all, and not just some.

Prev post1 of 4Next
Use your ← → (arrow) keys to browse
Tags: americaheadlinenewsobamaObama's farewell addressUSAworld
Share13Tweet8Pin3SendShare