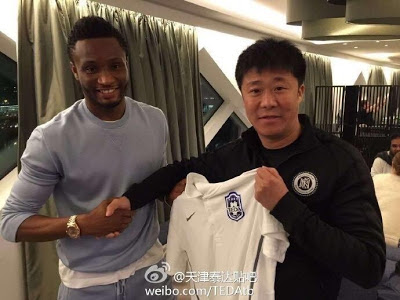 Super Eagles captain and former Chelsea midfielder John Obi Mikel explained why he accepted to move to Chinese Premier League to team up with Tianjin Teda. He said it was done to help Nigeria’s push to be at the 2018 World Cup in Russia. Mikel had been primarily snubbed from playing with the first team by Chelsea Coach, Antonio Conte, but he still remained a regular for the national team

So he decided to move to Tianjin Teda on a three year deal so that he could get some playing time.
Mikel said during an interview with Owngoalnigeria.com:

“I could easily have stayed in Chelsea for the remaining six months of my contract but it won’t be in the best interest of my nation, as they need me match fit when the World Cup 2018 qualifiers resume”.

“It wasn’t an easy decision to make but I seriously need matches to stay fit for Nigeria. Nigerians don’t deserve to miss out of the World Cup after back to back failure to qualify for the Africa Cup of Nations”.

Adding that he didn’t do it for the money even though his current paycheck is double what he made at Chelsea.