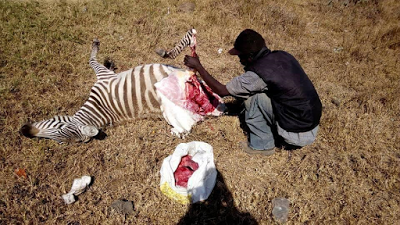 Photos of a man butchering a zebra in broad daylight next to Nairobi highway has shocked many.  Mombasa County Government Watch posted the photos on Facebook yesterday and wrote:

Unconcerned man butchers a zebra in broad daylight on the busy Nairobi-Nakuru Highway. It seems illegal game meat which is unfit for human consumption is finding its way to the butcheries. A man in Naivasha was seen stashing zebra meat in paper bag. 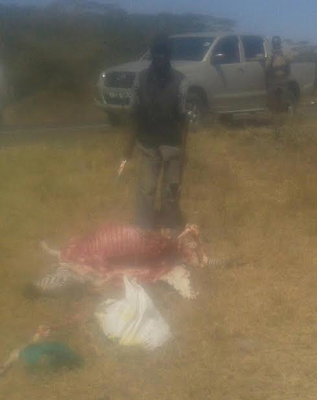 Naivasha is notorious for slaughtering donkeys whose meat is illegally sold to butcheries in as far as Nairobi and Nakuru.

But it seems butchers are now going after donkeys’ cousins in white and black strips; photos of a man cutting a dead zebra into pieces and stashing the meat in a paper bag have gone viral on Facebook.
The man seemingly looked unconcerned as he went by his business while curiosity onlookers plying Nairobi-Nakuru highway watched in shock.
It’s however not clear whether the man was the one who killed the zebra or it had been knocked by a speeding motorist.
More photos below… 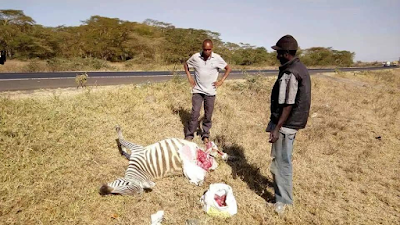 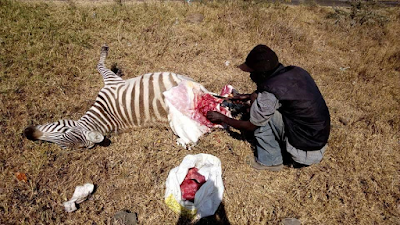 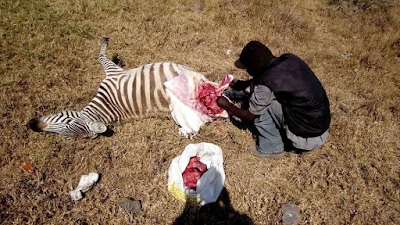