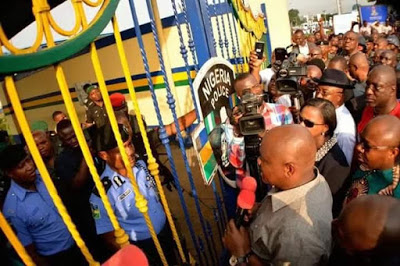 Addressing newsmen at the force headquarters in Abuja today, the Police Public Relations Officer, Don Awunah, said the dismissed officers acted against the IGPS directive that none of them should interfere in the electoral process during the election. He said that investigations carried out by the force, showed that the dismissed officers while in the convoy of the state governor, Nyesom Wike on the date of election, 10th December, 2016, misused the firearms in their possession contrary to the provisions of Force Order 237. He said the affected officers became overzealous, took laws into their hands and opened fire, causing panic in the crowd.

They reportedly joined in storming the Port Harcourt City Council Secretariat and prevented the movement of election results of Emouha polling unit to the appropriate collation centre designated by INEC, in flagrant disregard and disobedience to senior Police officers present at the venue. He added that the six (6) Police officers, after the conclusion of investigation into their actions, were subjected to internal disciplinary measures, found guilty and consequently dismissed from the Force. Awunah said they will be prosecuted under the Electoral Act to serve as a deterrent to others.